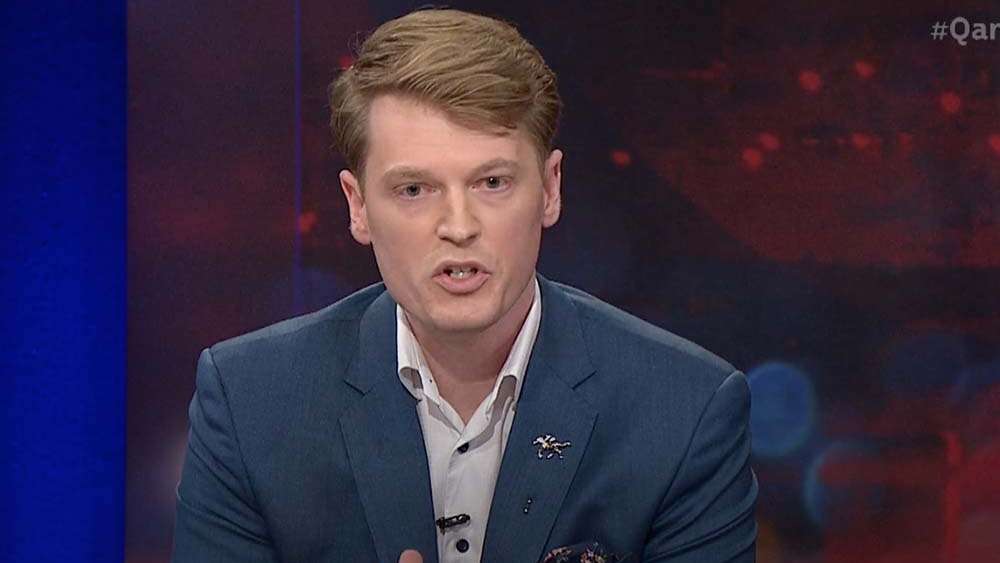 It was a tough gig for the Australian Christian Lobby’s (ACL) Martyn Iles on the ABC’s Q&A last night.

One challenging question he was asked came from the Liberal Member of North Sydney, Trent Zimmerman – an openly gay man – who asked “Do I need to repent?”

Iles did not flinch and boldly said “Yes”, pointing out that – as recorded in the Bible  the disciple John, Jesus, and the apostle Paul all called upon everyone to repent.

It is a message for everyone, Iles emphasised.

Iles has got good reviews for his performance on a tough night.

“Martyn Iles preached the gospel to Australia tonight”, academic Stephen Chavura posted. “He spoke about Jesus as our saviour. He remained cool, gracious, and articulate in the face of some fairly obvious hostility. He didn’t back down or appear embarrassed by his views. Yeah, #ACLspeaksforme.”

Chavura is a very strong supporter of ACL – but some critics of ACL praised Iles too.

“Martyn Iles did well on Q&A last night,” Presbyterian minister Nathan Campbell posted. “He articulated some deep Christian truths, the Gospel even, with his feet held to the metaphorical fire. And he did it with a degree of grace.” (Campbell went on to discuss how ACL’s platform is narrow.)

Iles’ best responses through Q&A came with questions about the Gospel, such as the exchange with Zimmerman. This was the best way round, giving short responses that fit being part of a panel on national television. If you had to pick which answers would land best, one would pick the gospel-centred ones

Eternity asked some experienced gospel preachers what they thought – two of them had to watch the show the morning after and we are grateful to them for that. They would take somewhat of a similar line to Iles on the Gospel, and they all have media exposure, so they are reviewers with relevant experience.

Karl Faase, CEO of Olive Tree media, and host of Jesus the Game Changer Seasons One and Two:

Martyn Iles handled Q&A very well. As is usual for Q&A, the panel and audience on several occasion tried to set him up to fail. Martyn was clear, measured, informed and unapologetic about a Christian worldview.

It was refreshing hearing a Christian leader, on a mainstream show, speak about repentance and the call for people to turn to God. It was surprising that the audience, in their applause and responses, were actually very supportive of Martyn’s points. Not sure if ACL stacked the audience or if the tide may actually be turning.

It would be nice if it was the second.

I prayed for ACL Managing Director Martyn Iles that he might proclaim Christ clearly on Q&A. God answered my prayers and the prayers of many others.

The Apostle Paul says in Colossians 4, “Pray that I might proclaim the gospel clearly as I should.” We are to pray for leaders to proclaim Christ clearly but we are to expect them to do so, as well.

They ‘should’ proclaim the gospel clearly.

I thought the hardest question for Martyn was from an “out and proud gay man”. It might have turned into a train wreck but, in the kindness of God, was the finest moment of the program, for Martyn and the gospel.

The questioner, Alain Millett, critical of the ACL for funding a campaign in support of Israel Folau, said: “What makes me really angry is that some people feel they need to get involved in restricting my basic human rights, like being protected from discrimination, in employment and the provision of services along with being free from hearing and reading hate speech.”

His question was: “Would Jesus support the ACL campaign in support of Folau?”

Martyn Iles spoke personally and well. First, he tackled the implication that the ACL was responsible for “hate speech”, noting Jesus said, “Hate is a very serious word.  It refers to someone’s motive … If you hate your brother you have murdered him in your heart … A Christian never looks at another person as an enemy to be destroyed … We only ever look at people as souls to be saved.”

Martyn Iles critiqued the media for saying that “Israel condemned homosexuals to hell.” His point was that Folau said “sinners are destined for judgement and, yes, Christians understand that as Hell. All of us will stand before God and we will all be judged. But then he turned the other side of the coin and he said forgiveness awaits to all who repent and put their trust in the Lord Jesus Christ because he died for our sin and he offers us a light unto God.”

“[Folau] said all of that in his post. And either you believe both sides of that coin, in which case you have condemnation and salvation, judgement and release, repentance and faith.  Or you have neither side of the coin … And if Israel Folau can lose his livelihood for saying that, then we should hunt out every single Christian in this country because they all believe it and have all said something similar at some stage in their life.”

There were loud applause from Q&A‘s studio audience. Louder applause than I expected. And there was applause from me in my lounge room as well. But, more significantly, I think the Heavenly Father would have been pleased Martin Iles had proclaimed the gospel clearly as he “should”.

I am now praying that viewers would reflect on the personal eternal significance of what Martyn said.

David Robertson, The Wee Flea blog and experienced media performer in the UK:

It’s a test of a healthy democracy to see how it deals with those who are different and don’t fit into the mould of the current cultural elites. Watching ABC’s Q&A, I wondered how Martyn Iles – the managing director of the Australian Christian Lobby – would fare.

Last night’s show was one that taught us a great deal about contemporary Australian society.

“I thought that Martyn was an excellent spokesperson for the Gospel.” – David Robertson

Firstly the political and media class seem to share all the same presuppositions and think it incomprehensible that any sane or good person would not believe exactly the same as they do.

Secondly, although I did not agree with everything Martyn said (for example, ‘Israel Folau believes what mainstream Christians believe’ – that is true of repentance, but not of Folau’s non-Trinitarian beliefs), I thought that Martyn was an excellent spokesperson for the Gospel.

He answered clearly, graciously and without giving in to the mockery and bullying he faced. It was an impressive performance. Daniel was in the Lions’ Den. By surviving, he was victorious!

Two footnotes on transgender, a subject Iles also was asked about on Q&A:

This scarf wants to change the world

This scarf wants to change the world

Key Federal Parliamentarians will be presented with individual, handmade scarves this Monday, June 21, as…