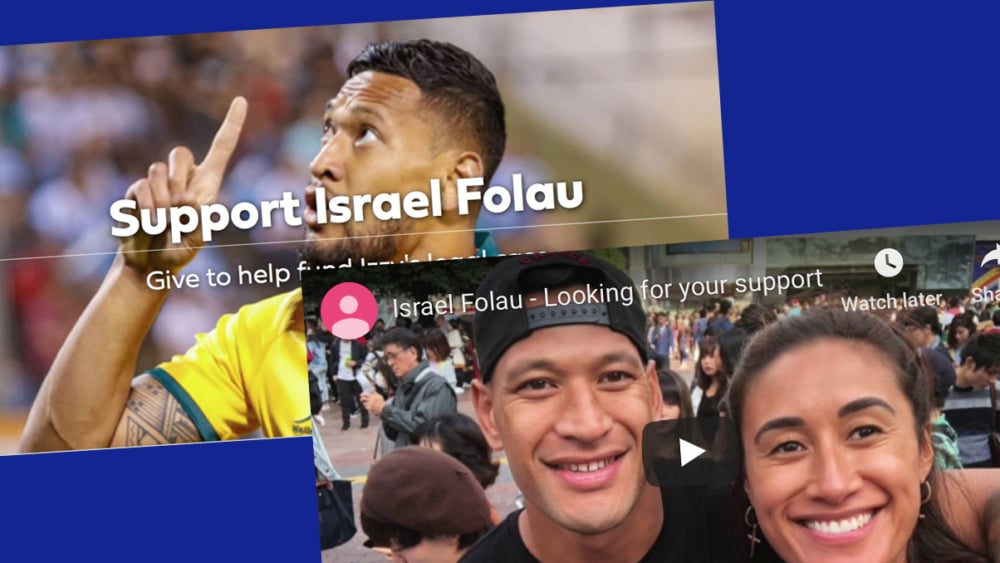 The Israel Folau fundraising campaign has restarted with the Australian Christian Lobby (ACL) setting up a new site for donations.

The new site www.acl.org.au/donate_izzy is now live. Donors who flocked to the GoFundMe campaign will now be able to send their refunds from GoFundMe to Israel Folau via ACL.

“On behalf of the Australian Christian Lobby, I have spoken to Israel Folau to let him know that ACL will be donating $100,000 to his legal defence, because it’s right and it sets an important legal precedent,” Martyr Iles, Managing Director of the ACL writes on the new page.

“I have also offered to host his online appeal for funds here on our website and he has accepted our offer.

“All gifts you give on this web page will be deposited into a trust account to pay for Israel Folau’s legal case.

“So, please give generously today to help Israel Folau stand for your religious freedom.”

GoFundMe’s refusal to run the Folau campaign will have cemented the underdog status of Folau among his supporters while at the same time virtue signalling towards more ‘progressive’ members of the public. A number of religious leaders are coming out in support of Folau.

Freedom For Faith’s Michael Kellahan, was quoted by The Australian as saying GoFundMe’s decision to remove the campaign had actually “galvanised support” for Folau’s cause.

“People have been asking me how else they can donate and telling me they now want to double their contribution,” Kellahan reposted on the FFF Facebook page.

“What GoFundMe has done is discriminatory because they’ve said they’ll support people who have certain beliefs but not others.”

Kellahan is a key player in the coalition of mostly conservative religious groups campaigning hard for religious freedom.

ACL also emerges as a winner as it will now get access to the details of donors to their new site, building a more potent campaigning vehicle for Folau than GoFundMe would have.

The next round in the Folau campaign is on Friday when Rugby Australia and their ex-player meet in a mediation session at the Fair Work Commission.

Lyle Shelton has posted the email GoFundMe sent him when returning his donation to the Folau fundraiser. This promises a refund in three to seven working days, which means there may be a fresh wave of donations to the new site in a few days from the GoFundMe donor cohort.

Sydney’s Anglican Archbishop Glenn Davies has issued a statement in support of Folau’s right to speak about his faith. “Israel Folau’s right to express his faith and act according to his conscience is of fundamental importance in any democracy, and it is of great concern to many Australians that this right is being denied and vilified. Many are wondering whether they will be next. No-one should suppose that there are not deeply held views on either side of this issue. But at the moment, only one side is being heard. The way in which Folau’s motives have been impugned and his avenues of support have been cut off smacks of a new and ugly Australia where dissent from narrow cultural views is not tolerated.

“The original post on Instagram canvassed some basic tenets of the Christian faith. It was not the entire Christian message, but it was posted without malice and from a place of deep conscience and concern. It encompassed all people, for we are all liars. It was posted with respect and with urgency. It had nothing to do with rugby and it should have been his right as a citizen to speak of what he believes without threat to his employment.

“Christians do not ask that everyone agree with us on the reality of heaven and hell, but it is part of our faith DNA that we speak out about Jesus, whatever the cost. I say again that I support Israel Folau as a Christian brother. I support the right for him to articulate his faith in the public sphere of social media. I admire the resolute way he has given his personal testimony.  Why, in the diversity of views in modern Australia, is that faith to be silenced – the faith from which springs so much of the values and virtues of our own civilisation, let alone the charitable works of many Christian churches across our land.

“Ultimately, this will not be decided in the media. The clear support of ordinary Christians has been ignored, marginalised and silenced. Many commentators (and many politicians) have failed to understand the precious nature of conscience and belief and its power in the lives of ordinary Australians. Loud, intolerant voices swamp the quiet faith of many. But I pray that what Israel Folau is going through may shine a light on an issue which is vital to our democracy and of crucial importance for Christians – freedom of speech, freedom of worship and freedom to live according to our faith.”

NSW Presbyterian Moderator (state leader) Kamal Weerakoon has issued a statement supporting Glenn Davies: “I issue this press release in full support of the statement issued today by Dr Glenn N Davies on behalf of the Anglican Church in Sydney.

“As Dr Davies says, ‘[t]he way in which Folau’s motives have been impugned and his avenues of support have been cut off smacks of a new and ugly Australia where dissent from narrow cultural views is not tolerated.’

“Those involved in the relentless attacks on Mr Folau – including politicians, big business, and the media – should consider the impact such censorship has on public speech generally. Heavy-handed censorship never actually stifles dissent. It only drives such dissent underground and makes people angry that they are being disrespected. That kind of suppressed anger is not good for any community.

“As Dr Davies says, ‘Christians do not ask that everyone agree with us”, but “speak[ing] out about Jesus” “is part of our faith DNA’. True tolerance does not require us to agree with everyone on everything. It does mean that if we disagree with someone, we do so in a way that respects the person we are disagreeing with.

“A truly tolerant society does not punish dissent. It rebuts unpopular views with courteous respect. That’s the kind of Australia that all kinds of people, from different ethnicities and religions and sexualities, can live in together with harmony.”