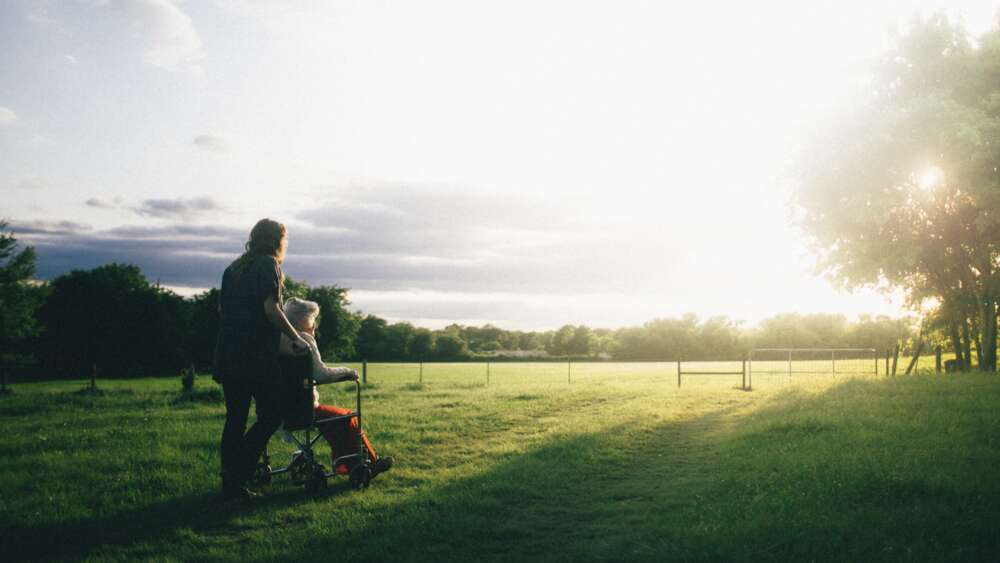 “I want to die with dignity at a time of my own choosing. I don’t want to linger. It’s cruel to let people suffer pain. We treat dogs better than this!”

We’ve all heard and possibly even been swayed by the arguments as a wave of voluntary assisted dying (VAD) legislation has swept through the country. As the NSW parliament considers a private member’s bill to legalise VAD, Eternity asked an experienced chaplain for his responses to the heartfelt calls for freedom to choose when one dies.

As the new General Manager Pastoral Care at HammondCare in Sydney, Steve Calder said he fully understands the growing calls for what many people believe is a more compassionate response for gravely ill people facing their final days.

As someone who has supported a large group of people facing the end of life, Steve acknowledges it can be a harrowing time. For families watching on, the suffering of someone they love is confronting and can cause distress.

Steve said modern, well-resourced palliative care does help manage the suffering in most cases. In his seven years supporting people in a palliative care ward at Greenwich Hospital, on Sydney’s north shore, he clearly recalls two patients with what he described as “remarkable pain”.

“We have great medicine, great drugs, and professional people who can walk the line between relieving the pain and not being overmedicated. People spend years training to get really good at that,” he said.

Steve says many people are not aware of what today’s palliative care can offer. He describes palliative care as a form of “person-centred, relational, quiet, gentle, multi-disciplinary care” that can begin as soon as a life-limiting illness is diagnosed.

“I’ve seen in news reports recently about the kind of suffering that people are enduring. They use words like ‘cruel’, and ‘brutal’, and ‘if we had VAD, then my dad wouldn’t have had to go through this cruel painful ordeal’,” he said.

Steve has had people say to him while he’s been sitting with a patient and their family close to the end: “I can’t believe that we allow people to suffer like this. We don’t treat our dogs like that.” He said these people are not aware that most pain can be effectively managed.

Pastoral and spiritual ministry needs to be a part of palliative care service whether patients are religious or not because everyone has spiritual needs.

“Everyone has spiritual needs, which might include the need for someone to debrief with, or the need to think about what the meaning or purpose of their life has been, or someone just to talk with when the family aren’t there,” he said

“And that’s been especially the case in COVID-19 when there’s been restricted visiting – that’s all part of the offering that good palliative care should include.”

Many people say they don’t want to linger in illness – they’d rather be hit by a bus and not know anything further. But that option is not fair on our loved ones. And our lives have more significance than our individual selves, which may come as a surprise to people in our fiercely autonomous culture.

Steve said people may abandon the idea of seeking VAD if they find a purpose to live out their days. He cites the case of a successful businessman in his mid-80s yet still a CEO when he came to hospital for end-of-life care, as an example of someone who needed a purpose to continue.

“But at the same time, there was his 60-year-old son, who came to me in the corridor and said, ‘This is the first time in my life I’ve had any time with my father. He has been so engaged in his business and now, for the first time, my father is in a place that he can’t run away and do business’.”

The son declared that he desperately wanted to spend time caring for his dad. He asked Steve whether there was anything he could do to make his dad understand.

Steve gave it a go there and then. “I said, ‘I don’t know whether you believe any of this, but I want to tell you that you are made in the image of God, that you’re valuable as a human being. What’s more, your worth and value in life are not now linked to your capacity to do work or your abilities.

Over the next few days, the man who wanted to die and refused to get out of bed perceptibly brightened and lifted his head a little.

“In the next short while, the man actually went for a picnic down at Greenwich baths,” Steve said.

He went from a man who said, ‘I’m going to die, I’ve got no purpose’, to getting out of bed going on picnics, spending time with his family, and seeing that life had meaning,” he said.

“The point is that there are people who realise that hastening death is not the only option and that there’s something valuable and there’s a purpose and a meaning that they can link into.”

The concept of individual dignity is a key argument for VAD – people want the right to be able to die with dignity.

Chochinov has come up with a program of dignity therapy that is being used widely, including in Australian hospitals. Steve trained in the program five years ago in Canada.

It’s an interactive process where the patient tells their life story by responding to 10 questions that help them reflect on their life and the things that stood out as giving the most meaning, purpose and hope.

The therapy produces a legacy document that can be passed on to the family and reinforces to people that they still matter to the last moment of their lives.

While in Canada, he heard of a case of a man who abandoned the idea of seeking VAD halfway through the dignity therapy process because he rediscovered a purpose in his life.

The things that really matter

He believes the four things that matter most as we are dying are being able to say and hear 11 words: “Please forgive me. I forgive you. I love you. Thank you.”

The book stresses that these loving words are especially powerful for people who have had difficult and even possibly abusive family relationships.

“Of course, that has a horizontal component, but also has a vertical component. So there’s a sense in which being able to say to God, ‘please forgive me’ is important.”