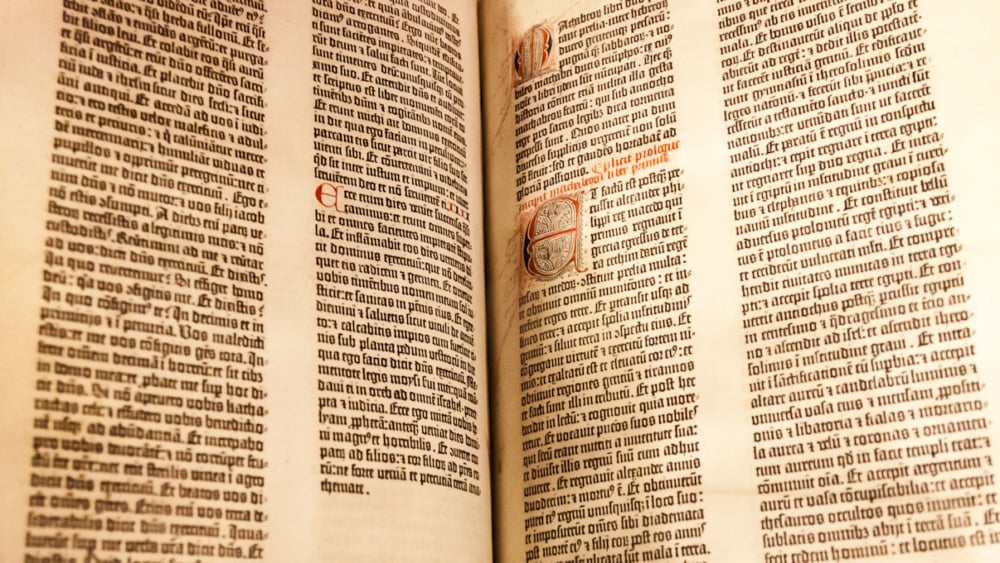 Detail from the Gutenberg Bible, first published in the 1450s.
JiahuiH/Flickr License

Why the Bible is split in two

We’re not talking about the Old and New Testaments

Bible Society Australia’s resident historian John Harris on why the Bible is divided down the middle – on the page.

Two main factors have led to the two-column Bible: tradition and size.

For all sorts of historic reasons, Bible texts have traditionally been two-column. It has always been the case that two columns made people think it looked like a Bible.

Many serious reference books, for example, are also two columns (such as encyclopaedias) and people have a kind of expectation that this denotes seriousness.

It is also very true that two columns saves space. Depending on where the centre margin is placed, two columns can save at least 10 per cent [of its total amount of pages] and usually far more, up to 25 per cent. This is a very significant issue for Bibles which are, of course, already very large to start with. I just picked up the nearest Bible – a Bible Society Australia edition of the Good News Bible.

The Bible text pages take up 1400 pages. This Bible would be approaching 1680 pages with the same font size, if I apply a reasonably conservative figure of 20 per cent.

It’s worth noting that it’s not only serious text books which have two columns, magazines and newspapers also do.

The comment that two columns are more difficult to read is not supported by research. The eye has to move a lot further for one column. It is also generally agreed that it is not so much the length of the line that the brain/eye combination reacts to, but the number of characters. Generally speaking, about 50 or so characters per line – that is an average of about 8 words – is ideal. This is more attainable in two-column pages than one column. It’s worth noting that it’s not only serious text books which have two columns, magazines and newspapers also do.

There may be a psychological factor but I am not convinced, even though it’s true that novels, for example, are usually one column. It is also said that two columns are off-putting (and that people prefer to read a one-column page). As I said, this may be true but I am not so sure looking at magazines and newspapers.

Bible Society Australia has published single column Bibles such as the CEV translation (and some specialty New Testaments in single column versions) but I do not know whether or not people were more likely to read them than if they had been two column. Some of this is addressed in web-page development studies, which you could an explore online by doing a quick search.

My conclusion is that if the Bible went to single column, we would need to increase font size from 9 or 10 to at least 12 if not 14. And if we did that, its getting to be a very big book at something like 1680 pages at 12 point (plus more for Bible maps, notes and other additional information).

We can try to solve that with thin paper but it would still be very big.

Why are Bibles printed with the text in two columns instead of one?

Today I Found Out