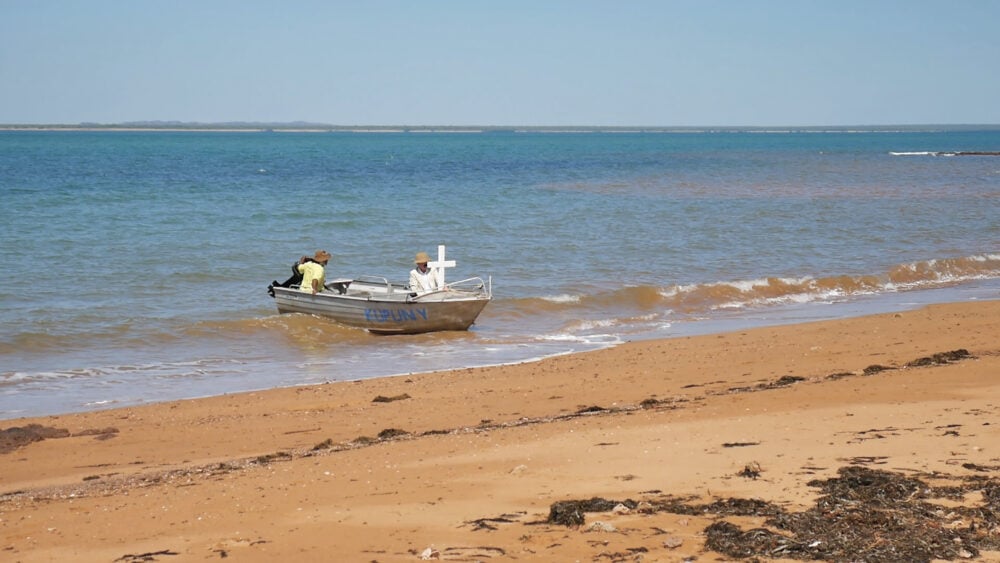 A century after the first missionary arrived on South Goulburn Island (also known as Warruwi), the first book of the Bible has been translated into the local language.

A hundred years ago, the first Methodist missionary set foot on South Goulburn Island, about 300 kilometres east of Darwin, off the coast of West Arnhem Land. Rev. James Watson arrived by bark canoe, having ridden on horseback to the mainland coast from Oenpelli (also known as Gunbalanya) in West Arnhem. He established the first Methodist mission in northern Australia.

On June 22, 2016, exactly 100 years since Watson’s arrival, the people of the island again gathered to watch another minister – Rev. Lindsay Parkhill – re-enact that first coming. This time Lindsay arrived in an aluminium dinghy named “kupuny”, which means bark canoe.

Indigenous elders and missionaries old and new made their way to Goulburn Island for the centennial celebration, which not only celebrated 100 years of Christian witness but also a new arrival: the first translation of a book of the Bible into the local Maung language – the Gospel of Mark.

The translation was completed by local translators Rosemary Urabadi, Sandra Makurlngu and Nancy Ngalmindjalmag, with assistance from the Australian Society for Indigenous Languages (AuSIL), Coordinate, and published by Bible Society Australia.

“If we translate [the Bible] into Maung and somebody preached at the church in Maung, everybody will understand it better.”

“As I was going, the whole thing helped me understand the words that Jesus was speaking,” said Sandra, speaking about her experience of translating the Bible with Coordinate, an agency of the Uniting Church’s Northern Synod that supports Indigenous translators.

“How he called his disciples and how they listened and followed him. He told them to go out and tell his word. It is these same words that he is speaking to us and to this generation.”

There are about 1500-2000 speakers of the Maung language, says Lindsay, who is a ministry resource worker for the Uniting Church in West Arnhem Land. “It’s not a big language group, but it’s very strong.”

“All the work they do is run back through the community,” says Lindsay, who helped train the Indigenous translators in using the translation computer software provided by AuSIL.

The Book of Mark translation has been in progress for the past five years.

Local translator Nancy Ngalmindjalmag says her family were translators throughout history. “It runs in the family.”

But Nancy’s main concern is that the language continues to be strong in the community. “It’s why I wanted to be a Bible translator, so we can keep our language alive. I want to do this for my people, and the future of my children as well.” Maung leader Johnny Namayiwa, who also served as a translation checker for the Book of Mark, says, “If we translate [the Bible] into Maung and somebody preached at the church in Maung, everybody will understand it better.”

The translation process is a very long and detailed one and takes years to reach publication stage. In 2016, Bible Society Australia has partnered with mission agencies such as Wycliffe Bible Translators and AuSIL to ensure that the hard work of the faithful Indigenous translators and support teams is not in vain, bringing the hope and light of the Word of God into the lives of Indigenous people such those living in the remote Goulburn Islands.

“As the publisher of these precious books of the Bible, Bible Society is committed to ensuring the works remain accessible and affordable,” says Bible Society Remote and Indigenous Ministries coordinator Paul Eckert.

Less than 20 per cent of Australia’s Indigenous peoples have the complete Bible in their heart language. There is still so much work to be done. Can you help Bible Society fund this important work? Go to biblesociety.org.au/vital

“Jesus said, ‘Now, go home to your friends and tell them what wonderful things the Lord has done for you and how merciful he has been.’” Mark 5:19

Indigenous Australians are calling out for the Scriptures in their heart languages. Can you help Bible Society?