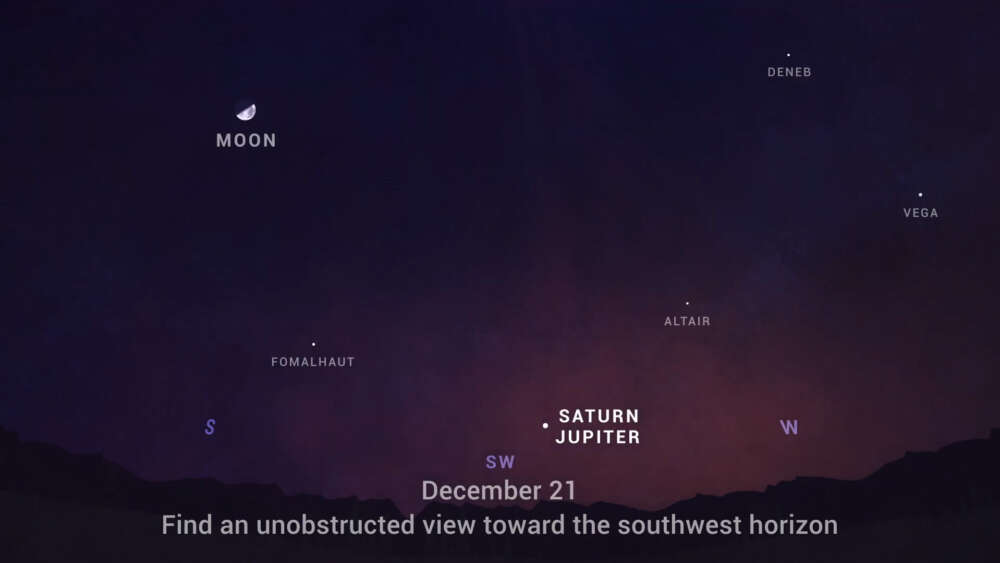 Jupiter and Saturn have been traveling across the sky together all year, but this month, get ready for them to really put on a show.
NASA
In Depth Christmas

On 21 December, Jupiter and Saturn will come so close together that to the human eye they’ll appear as though they’re overlapping. It is the first time in 800 years that we’ll be able to see this “double planet” effect.

It’s known as “the great conjunction” and, according to NASA, happens every 20 years. This cosmic event is when the orbits of Earth, Jupiter, and Saturn periodically align to make these two outer planets appear close together in our nighttime sky.

“It’s one of these rare times when the majesty of the solar system presents itself to the naked eye,” Konstantin Batygin, a professor of planetary science at the California Institute of Technology, told The New York Times.

NASA says this is the “greatest” great conjunction between Jupiter and Saturn for the next 60 years, with the two planets not appearing this close in the sky again until 2080. In fact, this year’s conjunction is the closest the planets will have appeared to the human eye since the middle ages — 1226.

A similar conjunction happened in the 17th century, but was barely visible to the human eye because of glare from the sun.

Michael Brown, an astronomer at Monash University in Australia, told The Washington Post that while we’ll see the planets as extremely close, they’ll still be separated by about 450 million miles in space. In effect, our eyes will see Jupiter lapping Saturn – with Jupiter orbiting the sun faster than Saturn.

A similar planetary conjunction event has been postulated as an astronomical explanation of the Star of Bethlehem, in the gospel account of Jesus’ birth.

In the Gospel of Matthew, chapter 2, the Magi see a star rising in the east and take it as a sign that the Messiah is born. They follow the star until it stops over the place where Jesus was, where they presented the baby with gifts and worshiped him.

Johannes Kepler, a 17th century German astronomer who created the laws of planetary motion, put forward the theory that a triple conjunction  – where planets align three times in close succession – was the cause of the Star of Bethlehem.

This year’s conjunction won’t appear multiple times. But its single appearance will look similar to what Kepler imagined the Magi followed in the Christmas night sky.

Dr Luke Barnes is an astrophysicist who lectures on astronomy and cosmology at Western Sydney University. He told the Undeceptions Podcast (part of the Eternity Podcast Network) that there are three main theories grounded in astrophysics about the Star of Bethlehem.

“We can trace the night sky backwards in time quite nicely – it’s a fairly simple physics system,” said Dr Barnes.

“We can go back and work out that there was a triple conjunction of Jupiter and Saturn in about 7BC. Every now and then, Jupiter and Saturn will look like they’re in a similar place in the night sky – that’s a conjunction. If that happens at the right time of year, not only will they come together, they’ll actually come together three times over the course of a couple of months.”

That could explain why the Magi saw the star a few times as they headed towards Jesus.

When there’s talk of a ‘new star’, Dr Barnes says the first thing an astronomer is going to think about is a Nova: a nuclear explosion on the surface of an old star, or a supernova “which is a massive star totally blowing up”.

“If that happens, it would be very bright. It’s not something predictable, but it is something that the ancients knew about. It would be an amazing, big thing.

“The thing with a supernova is we can work out from looking at their remnant, how long ago they blew up. So we know that there was a supernova in 1054. And we have both historical evidence for that, and when we do the astrophysics and wind the clock back, we can see it.

“But there are none that land us in 6BC or 5BC. That’s a problem. Though maybe we just haven’t found it yet.” 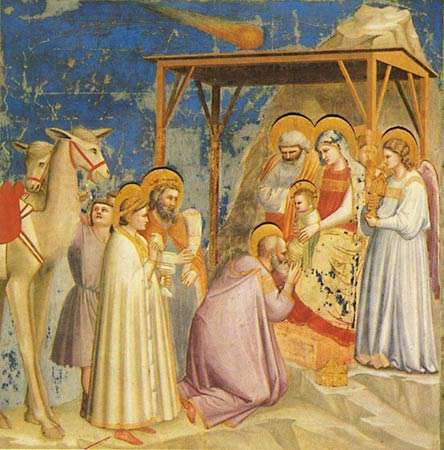 Adoration of the Magi, fresco by Giotto di Bondone, 1305–06; in the Arena Chapel, Padua, Italy. The fresco features a realistic depiction of a comet as the Star of Bethlehem. Brittanica

Dr Barnes’ favourite theory is that the Star of Bethlehem is actually a comet.

“Comets were sometimes called stars in the ancient world. ‘Star’ was a more general term meaning something bright in the night sky. [Ancient writers] Josephus and Pliny both referred to comets as stars. They are more often a bad omen, but sometimes they can be a good omen.”

Dr Barnes says there is a connection to Numbers 24:17, which says “I see him, but not now; I behold him, but not near. A star will come out of Jacob; a sceptre will rise out of Israel.”

“The idea of a star ‘standing over Bethlehem’ would – if the tail of the comet was pointing upwards and depending on where you are – look like a great big pointer to a particular place.

“[A comet] is the closest thing we have to some sort of ‘standing over’ star.”

Looking through the astronomy records, Barnes says “there’s a comet recorded by the Chinese in about 5BC”.

“Colin Humphries – a material scientist from Cambridge – thinks that’s the one. But those records aren’t quite complete, so there’s a bit of debate about that.”

“It’s a great big ‘we’re not totally sure’ from astronomers,” says Dr Barnes.

“But there’s some interesting theories. The great German astronomer Johannes Kepler was trying to work this out 400 years ago! And there’s still plenty of interest in it.”

When the second man to step onto the moon, Buzz Aldrin, planted his feet, his…