20 years ago, I was doing Christian outreach at the Sydney Olympics ...

This week marks the 20th anniversary of the Sydney 2000 Olympics and both local news and friends on social media have been taking a trip down memory lane. And let’s be honest, the nostalgia hit – with its resulting endorphin release – has been a welcome gift in a tiresome year.

Together, Australians have recalled our classic collective memories – including the announcement of Sydney winning the bid to host the games, with International Olympic Committee president Juan Antonio Samaranch somehow managing to squeeze an extra syllable into the city’s name. And, of course, the iconic Cathy Freeman moments – first carrying the torch and lighting the Olympic cauldron in the opening ceremony; then gliding past her opponents in the final straight of the 400 metre sprint to win the gold medal; and then wonderfully draped in both the Aboriginal and Australian flags in celebration.

Though I wasn’t inside the stadium to see Freeman win, I was sitting on a hill inside Sydney Olympic Park, watching on a giant screen with hundreds of others. What a buzz!

One of my best memories (and one I have no way of proving and realise hardly anyone will believe!) was standing on the corner of Market Street and Elizabeth Street in the city centre with my friend Beth. A high-security van pulled up across the road waiting to turn at the lights and sitting in the backseat was none other than Muhammed Ali himself.

In shock we said, “That’s Muhammed Ali!” – his face was familiar given he had just made an appearance in the games’ opening ceremony. Ali saw us, raised his arm to wave in the slow, shaky wave of a man dealing with Parkinson’s Disease. Dazed, we waved back, and his van turned the corner. We looked around to realise nobody had observed the fleeting moment, except us.

Yet, my strongest recollections of the Sydney 2000 Olympics are of a completely different nature because, as a Hillsong Bible College student, I was on “Outreach” – supposedly putting into practice the theory I’d been learning all year. What fortunate timing, right?

Games organisers had wisely restricted the swarms of young evangelists who were actually on-site.

All Christian outreach being conducted during he games was being coordinated by Youth With a Mission (YWAM).

And – there’s no polite way to say this – the culture clash between us Hillsong College Students and the YWAMers whose leadership we were to come under, was significant.

We didn’t argue or anything. We were all very respectful of one another. But for us Hillsong College students, those two weeks blessed us with the opportunity to embrace a steep learning curve.

Firstly, we needed to learn how to do things in a distinctly un-Hillsongish way. Forget slick contemporary music concerts designed to draw a curious crowd. Instead, we gathered around a single guy with an acoustic guitar and sung songs with lyrics like “I will shout for joy in the congregation”. Humility became a key virtue and there was no place for self-pride.

We took turns being rostered in pairs inside the actual Olympics – games organisers had wisely restricted the swarms of young evangelists who were actually on-site. So most of the time, were were instead “outreaching” around the city. 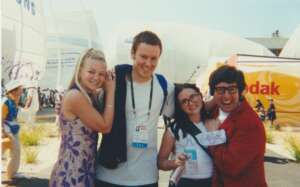 Kylie Beach and David O’Connor at Sydney Olympic Park for their Outreach – with Austin Powers characters (for some inexplicable reason).

For some reason, that meant many of us spent night after night hanging around the main drag in Sydney’s infamous red-light district of Kings Cross.

There, the occasional brave soul would have a go at some street preaching. One guy laid down prostrate on the footpath in a re-enactment of the prophet Nathan’s actions. We did some more singing around a guitar.

We also did a lot of walking up and down the street, trying to have conversations with people about Jesus. And, when we compared notes later, we learned that a bunch of us had led the exact same drunk man through the sinner’s prayer so that he could give his heart to Jesus.

At the time, it seemed to me to be a terribly unfruitful use of my time – fun as it was to be out and about in a city that was in festival mode. Now though, I can see how God used the time to teach me some valuable lessons about trusting him to use anything and anyone to draw people to Himself.

I had to learn to trust him with protecting the seeds we were sowing, even when I could not see how they could possibly take root and grow. Because, for all I know, getting led through the sinner’s prayer a bajillion times might have been exactly what God had planned to draw that drunk man to salvation. After all, God has been known to work in similar men’s lives before, hadn’t he? Even people like “Mr Eternity” himself, Arthur Stace.

Which reminds me of another Olympic memory. Remember this? In one scene in the Sydney Olympics opening ceremony a moment from Sydney’s 2000 New Year celebrations was re-enacted, with the word ‘Eternity’ illuminated in fireworks on the Sydney Harbour Bridge in Arthur Stace’s iconic chalk-graffiti script.