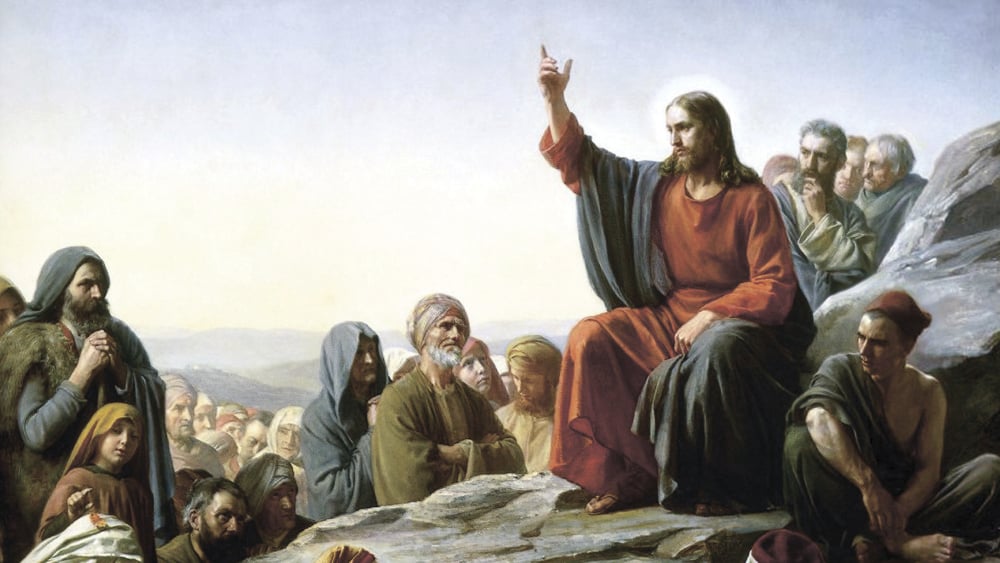 The Sermon on the Mount, Carl Bloch, 1877.
Wikimedia / Lecen License

Michael Jensen takes the Sermon on the Mount seriously

Is the Sermon on the Mount humanly possible?

In the Russian winter of 1910, one of the greatest novelists the world has ever known, Count Leo Tolstoy, wandered out into the cold night, contracted pneumonia, and died at a railway station, at the age of 82. His death came only a few days after he had determined to give up his aristocratic lifestyle, including vast estates, and live a life he thought was consistent with Jesus’ teachings in the Sermon on the Mount.

After writing his great works Anna Karenina and War and Peace, Tolstoy decided that he was going to follow what he thought were the true teachings of Jesus as contained in the Sermon on the Mount. For Tolstoy, the Gospels were the heart of the Bible and the Sermon on the Mount was at the heart of the Gospels. As one writer said: “Tolstoy boiled down the essence of what he thought Christianity was to obeying the five commands of Christ in Matthew 5:21-48. If people would genuinely fulfil these commandments, then the kingdom of God would be activated on earth.”

“Why does it take a madman to think that keeping Jesus’ teachings quite literally was in fact a good idea?”

Tolstoy was, in particular, attracted to Jesus’ teaching on non-retaliation. He wrote:

“It may be affirmed that the constant fulfilment of this rule is difficult, and that not every man will find his happiness in obeying it. It may be said that it is foolish; that, as unbelievers pretend, Jesus was a visionary, an idealist, whose impracticable rules were only followed because of the stupidity of his disciples. But it is impossible not to admit that Jesus did say very clearly and definitely that which he intended to say: namely, that men should not resist evil; and that therefore he who accepts his teaching cannot resist.”

There were communities set up to implement Tolstoy’s teachings, but not one of them succeeded. One of his disciples later reflected that Tolstoy’s views – which were supposed to build God’s kingdom on earth – “alienated him from many friends, brought discord into his family life, strained his relations with his wife, and left him spiritually alone.” That was why Tolstoy died alone at the train station. The truth was, his ideals were not very real, even in his own life – he was fleeing from his wife and family.

And here’s the thing: Here was a man who (he thought) sincerely tried to live according to Jesus’ teachings in these verses, and it destroyed him. It proved to be an impossible idealism. And that ought to make us pause – are Jesus’ teachings simply impossible? Are they completely inhuman and unrealistic? People do retort by saying, “Well, Tolstoy was mad.” And indeed this is arguable; but why does it take a madman to think that keeping Jesus’ teachings quite literally was in fact a good idea?

The alternative way of approaching the Sermon on the Mount is to see it as a “goad to the gospel”. That is, you see it as Jesus exposing how sinful we are by driving home the real meaning of the law. We’ll despair so much, that we’ll be driven to justification by faith alone. Whew! The Christian life, then, proceeds by forgetting the Sermon on the Mount, and just as well. I’ve heard this preached from evangelical pulpits a couple of times, in fact. The German theologian Dietrich Bonhoeffer and many other interpreters have found this way of reading the teachings of the Lord deeply unsatisfactory, and it is hard not agree with them. It just seems weird not to be taking Jesus’ words more seriously than that.

Or, would it be better to see the Sermon as giving us two standards for living – one for ordinary Christians, and another for the spiritual elite such as monks and nuns? Augustine of Hippo argued for this view. Or, is Jesus outlining an ethics to live by in a particular spiritual context? Surely a king or a president can’t “turn the other cheek”? This was the view put forward by Martin Luther in the 16th century.

Or is Jesus outlining an emergency ethics for the end times, because he was convinced that the world was about to end? The great missionary doctor Albert Schweitzer taught this way of reading the Sermon at the turn of the 20th century.

The problem with these other views is that we then don’t take Jesus’ words seriously as a way of living. Jesus seems to be offering quite direct and practical wisdom: “turn the other cheek,” for example. Surely we are supposed to do as he commands, right? At least Tolstoy seems to be taking Jesus at his word.

“Jesus speaks in language that is extreme, in order to make us think again.”

But if we are to do what Jesus commands … won’t we be cutting off our hands? Won’t we be removing logs from our own eyes? Won’t we be trying for a perfection that is impossible?

Not if we follow two observations, which I think are essential to understanding the sermon.

First: Jesus speaks in language that is extreme, in order to make us think again. Jesus is exaggerating for a very important effect – he wants us to “seek first the kingdom of God, and his righteousness.”

That is a key verse for understanding the whole sermon, because what Jesus is trying to do is to get his audience to do exactly that: to seek God’s kingdom. In other words, he is trying to get us to detach from the fallen world and instead long for the world to be as God intends into be – including our own hearts.

“What would happen if you did love and pray for your enemies?”

Jesus uses language like explosive shells – to blow apart our preconceived notions of what true worship is and make us think again. Could it be that ones who are really blessed are the poor, or the defeated and the persecuted? Maybe you should cut your hand off – just maybe. Sin is that serious, and evil is that dangerous. What would happen if you did love and pray for your enemies? What if you committed to complete anonymity in your giving?

Being a disciple of Jesus is unlike anything else. It demands a completely new cast of life, a new perspective, a new heart. We cannot do with anything less than a completely changed attitude. That’s what Jesus is trying to get us to see.

Second, Jesus recognises that those who are his disciples are not those who are sinless, but those who long for mercy. They are those who long for the kingdom of God and know that that includes them too. They are those who pray for the forgiveness of their sins, and who count themselves poor in spirit. They mourn for their sins, in repentance. It is they who are open to Jesus’ teaching, and are ready to receive it. It’s not as if Jesus teaches salvation by good works in a way that is at odds with Paul’s teaching about justification by faith alone. Jesus does not undermine the grace of God in the Sermon. Rather, he brings us into it. He makes us want it.