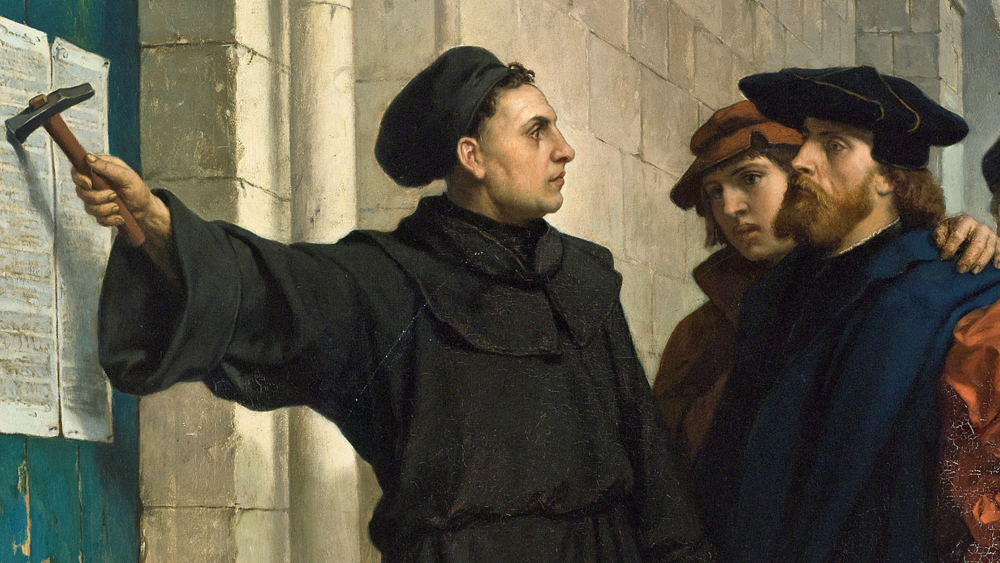 To get from Luther’s house to the Castle Church in Wittenberg you need to walk down Collegienstrasse, a street so neat, so well restored and well kept that it might have been built last year.

So when you walk past the marketplace and around the bend that slowly reveals the Castle Church and the door where Luther’s 95 theses (the manifesto that kick started the Reformation) are said to have been posted, it feels as if the Reformation might have started last week. Or this afternoon. Not 500 years ago.

The guides in period costume walking down Collegienstrasse also help you think this way.

It is a tiny place to have started a revolution.

In fact, the Berlin Wall fell just in time to rescue Wittenberg, where photos from 1989 show historic buildings with their roofs caved in. And as your bus takes you back to Berlin, you pass the shabby chemical works, abandoned factories, decaying flat blocks  and other detritus of the old East Germany.

In truth, Wittenberg is about the size of Wagga Wagga – it is a little town. The Castle Church is no bigger than a small Australian cathedral, like Adelaide’s St Francis Xavier, or Sydney’s St Andrews. Wittenberg is a tiny town, enlarged by its place in history. It is a tiny place to have started a revolution. Walking into the Castle Church you have to pass by the door where Luther’s theses are immortalised. It’s Wittenberg-sized, fairly modest.

What a contrast to the huge MCG-scaled portico, complete with giant statuary and encircling colonnades, as you enter St Peter’s Basilica in Rome.

In fact, the two churches are linked. The fundraising activities to pay for St Peter’s formed one of Luther’s complaints against the Medieval church.

2017 was the year when it felt that we ceased to count in the centre of power.

In Rome the giant churches, like the whole city, are steeped in history. Unlike Wittenberg, the huge city and its churches are weighted with majestic history. Rome was not built in a day, so to speak.

Five hundred years ago, it must have seen improbable that tiny Wittenberg could cause mighty Rome any problem at all. It was so insecure that Luther’s friends staged a fake kidnapping to hide him in a local castle. Hidden away, he translated the New Testament into German. It’s what you do.

For Aussie Christians, whether Catholic, Anglican, Pentecostal, Baptist, Presbyterian or Uniting, 2017 was the year when it felt that we ceased to count in the centre of power, and moved to the outskirts of society. From Rome to Wittenberg, from Melbourne to Mildura, from Sydney to the bush. We moved from the big house to a flat.

Two major events this year have served to underscore an outsider’s status for Christianity.

From the pomp of Rome with its giant walls at the centre of an empire to the insecure and obscure Wittenberg. So in that sense, this year we are all Protestants, even the Catholics. Once upon a time we could count on a respectful hearing by wider society, now we are not so sure.

Two major events this year have served to underscore an outsider’s status for Christianity – the marriage debate and the report of the Royal Commission into Institutional Responses to Child Sexual Abuse. This applies whatever part you personally took in the postal survey debate, or whether your denomination dominated or was hardly mentioned in the royal commission. Those two events have reinforced two of the leading “belief blockers” that McCrindle Research identified for Olive Tree Media  – clerical abuse and homosexuality. This research is six years old – our Rome to Wittenberg moment has been coming for some time.

One of the responses to Christianity’s fading presence in the West has been a book by American conservative writer Rod Dreher called The Benedict Option. This calls for a tactical retreat from political engagement by Christians – remembering that this comes from the land of Trump. Dreher calls for Christians to create “thicker” organisations, stronger Christian communities, and even better Christian schools and colleges to build strong, thoughtful Christians. Others argue that Christians are needed in politics more than ever.

Real wisdom will be needed by Christians writing submissions.

As 2017 becomes 2018, the federal government has given Aussie Christians an early deadline. It has set up a panel to be headed by former conservative cabinet minister Phillip Ruddock inquiring into what extra protections religious freedom needs in our nation. Submissions have a deadline of Wednesday January 31.

The panel will:
Consider the intersections between the enjoyment of the freedom of religion and other human rights
Have regard to any previous or ongoing reviews or inquiries that it considers relevant
Consult as widely as it considers necessary.

Whether you regard my suggestion that we are all in Wittenberg rather than Rome is broadly correct, in error or merely fanciful, real wisdom will be needed by Christians writing submissions. It is a Goldilocks moment. Overreaching by making too many demands will give the panel and later the parliament indigestion. Aiming too low may mean we miss an opportunity. Here’s hoping that a flood of submissions get it just right.