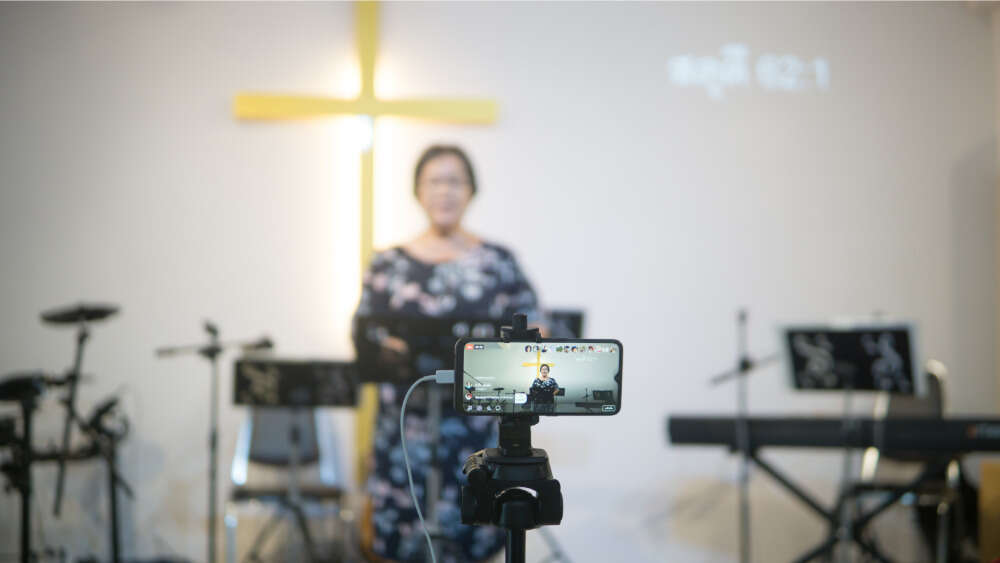 “I believe absolutely that there is full participation for women that the Bible allows,” says Bible scholar Jacqui Grey.

Grey has reached this egalitarian position – that women should be allowed to preach to anyone and to lead a church – after many years researching the Bible and hermeneutics (the study of how to interpret biblical texts). As Dean of Theology and Professor of Biblical Studies at Alphacrucis College, her qualifications include a PhD in theology and she is also an ordained minister. Her publications include Raising Women Leaders, Them, Us and Me: How the Old Testament Speaks to People Today, and Three’s A Crowd: Pentecostalism, Hermeneutics and the Old Testament.

Grey’s experience, along with her passion for enabling Christian women, is the reason why she has been invited to speak on the topic of “Women’s place in the church” on the latest episode of Eternity‘s Run Like a Woman podcast.

Of course, the issue of women in church leadership is still divisive. Many in the church – including women – are complementarian, and do not believe the Bible says women should preach to men and/or be a senior leader in the church. When asked to outline how she has reached her position that women should be able to do everything a man can, Grey patiently and systematically outlines her understanding of Scripture.

“We see a whole lot of women functioning in various different roles in the early church.” – Jacqui Grey

“We see in Acts 2 that the Spirit is poured out on all people. So young women, men, they’re all empowered to be witnesses to Christ. And then as the book of Acts goes on, we see a whole lot of women functioning in various different roles in the early church. So even just from that narrative account, we have different examples of women who are involved in ministry.

“And then as we read the letters of Paul, of course, there are some challenging passages that we tend to sort of focus on. But when we look at the overall picture, we see just a huge amount of different roles that women were functioning in … All throughout [Paul’s letters] it’s about people serving God and using the gifts that God has given them.”

And yet the “challenging passages” are still there in the Bible. These include 1 Corinthians 14:34-35, “Women should remain silent in the churches. They are not allowed to speak, but must be in submission, as the law says. If they want to inquire about something, they should ask their own husbands at home; for it is disgraceful for a woman to speak in the church”; and 1 Timothy 2:11-12, “A woman should learn in quietness and full submission. I do not permit a woman to teach or to assume authority over a man; she must be quiet.” So how does Grey explain these passages?

“I’d encourage people to think about the context of what’s going on in the early church,” she says. “So not just in those passages, but to think more broadly about what going on in the world of Acts.”

She notes the important role that Priscilla plays in the early church, as she accompanies Paul on his missionary journeys, along with her husband Aquila.

“Paul takes them to Ephesus where they then established themselves in ministry. It’s always ‘Priscilla and Aquila’ – so the wife is named first, suggesting that she has a bit more of a prominent role. Paul goes off and he leaves them there Ephesus and they teach Apollos. And again, it’s Priscilla as the primary person teaching Apollos …

“So if women can’t teach, well, what was Priscilla doing there? Why did Paul leave them there to teach Apollos and others within the church?”

“Paul is actually not as hostile towards women or as opposed to women teaching as we might think just by taking that verse in isolation.” – Jacqui Grey

Grey asserts that these two contentious passages – in 1 Corinthians 14 and 1 Timothy 2 – refer only to a specific problem at that time.

“One of the matters in particular that Paul is talking about in 1 Timothy 2 is the heretics. Some of them have been ex-communicated … but it seems that those people have really influenced some of the women in the church at Ephesus at that time. And so, Paul essentially says to the women – or perhaps even a woman that it’s directed at – they need to learn.

“Women in that day weren’t educated, they didn’t receive proper training. And so Paul says that the women or woman has to be silent, which is normal. That’s the attitude that a student should take; that’s the posture of a student at that time, she has to learn. And the implication is that once she has learnt, then she will be able to continue on in some kind of ministry, as Priscilla did before.

“So I think that sometimes we sort of really distort the message by taking books and sections in isolation and not reading it within the broader narrative of what essentially the Bible says about women and men functioning within the church.”

Grey continues, “And so even for 1 Timothy 2, if we read it in the broader narrative, we begin to see that Paul is actually not as hostile towards women or as opposed to women teaching as we might think just by taking that verse in isolation.

“Obviously, today we don’t face some of those same challenges that the women of Corinth had to contend with. But essentially Paul is saying for both men and women, the gospel is the priority. And so if that means that you have to change some of your habits, some of your preferences, then that’s what you do so that the gospel can be announced.

“It’s a bit ironic that in today’s society, we almost have flipped it the other way around. We are actually almost turning people off church by our attitudes towards women and towards minorities, which are actually unhelpful.”

“It’s not enough to just simplistically read ‘Men rule women and God rules Christ’, because we know from the Trinity that’s not what’s actually going on.” – Jacqui Grey

In the podcast episode, Grey goes on to address the issue of “headship”. Essentially, she argues that modern misinterpretations of the word “head” and “submission” have led to incorrect understandings of Scriptures that describe the relationship between men and women.

“We have to note is that there’s no sense of headship within the creation account in Genesis 2. There’s no reference to that. And the term ‘helper’ is actually a positive term. It’s someone who’s sort of a comparable partner. But where it gets messy is that then complementarians will read 1 Corinthians 11 and perhaps Ephesians 5 into that creation story,” she says.

“It’s a complicated passage,” she says, referring to 1 Corinthians 11. “It’s not enough to just simplistically read ‘Men rule women and God rules Christ’, because we know from the Trinity that’s not what’s actually going on.

“And if we keep that in mind, then when we think about male-female relationships and submission and all these things that these passages in 1 Corinthians 11 and Ephesians 5 are talking about, it gives a radical way to read it.”

“We’re all on the same team, and there is diversity within the unity of the body of Christ.” – Jacqui Grey

Of course, Grey acknowledges that some people may never agree with the conclusions she has reached on what the Bible says women should be allowed to do in church ministry. When asked if the church can move on without reaching agreement on this issue, she answers:

“I think for us, it’s really important to … to think about how we relate together as a broader, ecumenical church. We’re all on the same team, and there is diversity within the unity of the body of Christ. Even the fact of giftedness, I think, emphasises that – that there’s many gifts, but one body.

“It would be nice if we could agree on this particular topic about the role of women. But if we don’t, and even for other topics when we don’t, I think being able to identify that as those who follow Christ, we are together as the church. We are the church of Jesus Christ. And so, therefore, we are one, even though there’s a diversity of views within that one body.”

As such, Grey notes that love should be at the centre of any response to those who hold different opinions on the role of women in the church.

Listen to episode ten of Run Like a Woman – ‘Women’s place in the church’ via the link below: