Same saviour but a different society

There are two very different stories to tell about Australian and American evangelicals, says Hugh Chilton, an historian of evangelical history.

“For instance, the Jesus People of the counter-culture in the sixties and seventies – people like John Smith and Athol Gill and John Hirt and the like – really sought to describe that movement as authentically Australian and sought motifs for that,” says Chilton, author of forthcoming book Evangelicals and the End of Christendom: Religion, Australia and the Crises of the 1960s.

“They published gospel extracts and the like in distinctively Australian language – they had a book called The Day the Grog Ran Out and Other Stories from the Big Book.”

During this period, Fred Nile emerged as a conservative Christian figure. Chilton points out to Eternity that his model was the British cultural campaigner Mary Whitehouse. Nile’s movement borrowed the Whitehouse “Festival of Light” title for their campaign

Chilton sees “a lot of parallels between 1968 and 2020 in terms of a country grappling with divisions … on the streets and a big election as well.”

Then as now, evangelicalism as a global movement with national expressions, had to navigate the differences of culture while defining its essentials.

Last century, Australian evangelicalism struggled to break free from British models. But even in the sixties, coming to terms with the US – a  task for the evangelical present – was complex.

“[Australians] very much sought to define themselves as a different sort of evangelical,” explains Chilton. “But one of the interesting things I found about that is in criticising America, often evangelicals have used American’s own definition of themselves as the source of that critique.

“‘Billy Graham should be more like Martin Luther King Jr’ was one of the refrains through ’68, or ‘You’re a country that’s meant to be a bastion of liberty, so why are you prosecuting this war in Vietnam?'”

Remembering that the  term “evangelical” started as a term of opprobrium – along with words like “Methodist” or  “enthusiast” – the past five years have seen it associated with a form of cultural nationalism that has made the term “harder to re-appropriate” in Chilton’s terms.

So now, “there’s often prefixes: We’re generous-evangelicals, we’re open-evangelicals, what have you. I think that’s one of the big shifts that’s taken place. And there was a survey by McCrindle Research in 2014, which ranked different types of terms to describe Christianity – and ‘Evangelical’ was the second least popular term, just ahead of ‘Fundamentalism.'”

But in Chilton’s view, “evangelical” is a term worth preserving. One of its strengths is that evangelicals themselves are diverse. “I think that’s one of the other key messages in my book, that there’s a real diversity in the way Evangelicals engage with culture – and there’s a lot that’s been done and achieved by those who call themselves Evangelicals in terms of social renewal, welfare, and the building of nations.”

Even in the US, the common view that all evangelicals are to the right, is not accurate. Polarisation has not swallowed evangelicalism whole. And that is even more so in Australia. “Here, you think of organisations like Tearfund, Common Grace and movements like that,” observes Chilton, who concludes “so I think that the polarisation is less intense here.”

And finally a concern: “I think that there’s a danger that comes with the relative historic strength of evangelicals in Australia that perhaps – especially [for] conservative denominational evangelicals, like me – evangelicals can end up speaking to ourselves or themselves about themselves, and not connecting to the complex world in which people actually live.”

But Chilton is optimistic about Australia as a place to be an evangelical: “The last thing I would say in terms of contrasting that with what’s happening overseas is evangelicals needn’t be afraid of, perhaps, a more marginal social position. One of the people I studied in my book is Hans Mol who [did] the first substantial study of Christianity in Australia and what Australians believed about Christianity in Australia.”

“I found there was a great openness to conviction and that those dominations or Christian groups in Australia that had the most distinctive and different vision of life – and ability to challenge the status quo when necessary and affirm where possible, as well – were actually the most vital and able to withstand.

“So being on the margins isn’t necessarily a bad thing provided the drive is always to engage, translate and pass evangelicalism’s message along.” 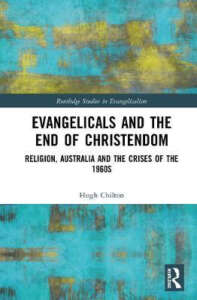 Evangelicals and the End of Christendom: Religion, Australia and the Crises of the 1960s by Hugh Chilton is published by Routledge.

Hugh Chilton is a Conjoint Lecturer in the Faculty of Education and Arts at the University of Newcastle, Australia. He is also Director of Research and Professional Learning at The Scots College, Sydney, and Vice-President of the Evangelical History Association.

You can join Hugh at the online launch of his book Friday 27 Nov 5:30pm AEDT: check in here

Evangelicals and the End of Christendom: Religion, Australia and the Crises of the 1960s