Nearly 200 evangelical leaders in the US have criticised Christianity Today magazine for publishing an editorial calling for the removal of President Trump.

The leaders – including author Eric Metaxas, Ralph Reed (President of the Faith and Freedom Coalition) and George Wood (Chairman of the World Assemblies of God Fellowship) – claimed “your editorial offensively questioned the spiritual integrity and Christian witness of tens-of-millions of believers who take seriously their civic and moral obligations”.

The letter from the leaders (published on Christian Post) also is a response to Christianity Today’s Mark Galli’s interview with CNN. In that interview, he claimed evangelicals who are upset or outraged by his editorial are “Christians on the far right, evangelicals on the far right, so they’re going to be as dismissive of the magazine as President Trump has shown to be.”

“We are, in fact, not ‘far-right’ evangelicals as characterized by the author [Galli],” the letter states.

“Rather, we are Bible-believing Christians and patriotic Americans who are simply grateful that our President has sought our advice as his administration has advanced policies that protect the unborn, promote religious freedom, reform our criminal justice system, contribute to strong working families through paid family leave, protect the freedom of conscience, prioritize parental rights, and ensure that our foreign policy aligns with our values while making our world safer, including through our support of the State of Israel.

“We take deeply our personal responsibility to render unto Caesar what is Caesar’s – our public service.”

“We are not theocrats, and we recognize that our imperfect political system is a reflection of the fallen world within which we live, reliant upon the grace of the Lord Jesus Christ, which is freely given to sinner and saint, alike.

“We are proud to be numbered among those in history who, like Jesus, have been pretentiously accused of having too much grace for tax collectors and sinners, and we take deeply our personal responsibility to render unto Caesar what is Caesar’s – our public service.

“The editorial you published, without any meaningful and immediate regard for dissenting points of view, not only supported the entirely-partisan, legally-dubious, and politically-motivated impeachment but went even further, calling for Donald Trump not to be elected again in 2020 when he certainly survives impeachment.”

A far left magazine, or very “progressive,” as some would call it, which has been doing poorly and hasn’t been involved with the Billy Graham family for many years, Christianity Today, knows nothing about reading a perfect transcript of a routine phone call and would rather…..

I guess the magazine, “Christianity Today,” is looking for Elizabeth Warren, Bernie Sanders, or those of the socialist/communist bent, to guard their religion. How about Sleepy Joe? The fact is, no President has ever done what I have done for Evangelicals, or religion itself!

David French, a conservative opinion writer posted an interesting analysis of the Christianity Today editorial firestorm. He suggests that the term “evangelical” might be used more widely in the States, than the way it is used in Australia and other parts of the world.

“In fact, however, the alleged Evangelical monolith is more conflicted than outside observers understand, and Donald Trump’s unique presidency is placing more strain on theologically serious Evangelicals than most Americans perceive,” wrote French.

“I added theology as a qualifier because not all self-described “Evangelicals” share the same beliefs or the same faith habits.

“Exit poll questions about religious identity are far too imprecise to provide true insight into a complex community. Many people who describe themselves as “Evangelical” simply because it’s the best option in a limited exit-poll menu don’t go to church often and don’t subscribe to all the key tenets of Evangelical belief. When they hear “Evangelical” they often interpret it as “politically conservative Christian.”

French attached this poll (sourced from an NPR story): 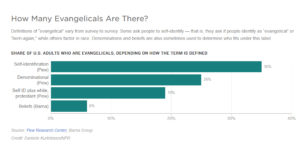 Thirty five per cent of the US citizens polled self identify as evangelicals. But only six per cent signed up to the nine-point doctrinal definition of evangelical Christianity put forward by Barna Group (a research company) .

However, the evangelical leaders (or certainly most of them) who signed the letter – and many who support the “never Trump” stance of the Christianity Today editorial – both fit in that six per cent group.

US evangelicals' support for Trump soars