I’ve never met a minister so proud to show me his wheelbarrow.

It’s been built out of spare parts: old bin ends, recycled wheels. The men who made it had a project—something to build together—as well as a way to bond, and a way to stave off boredom in a community where boredom leads to far worse things. Not only that, but the wheelbarrow itself will go on sale, and the money used to fund the ministry.

One of our big principles is, we charge. We charge people for services, we don’t hand out. Handouts do people no good at all.

That is, it’s not about the wheelbarrow, but about what it represents. That ordinary things can, with a bit of hands-on work, come together to be more than the sum of their parts.

Welcome to Break the Cycle, a ministry that operates out of Glenquarie Anglican in Sydney, with services for the ministry to the unemployed and marginalised in the area.

“It’s a general go-to place, for people here. And doing it in an environment that’s a bit nicer than queueing up at Centrelink,” says David Ould, the minister at Glenquarie Anglican.

David has been the minister at Glenquarie for five months, and he admits, “I can’t get anybody anywhere in Macquarie Fields to say a bad word about us.” David also gained some recent media attention after winning a contest by Channel Ten’s The Project where he was chosen as a co-host for a day.

The kind of services Break the Cycle offers is best understood in terms of the surrounding area. Located in the outskirts of Sydney’s suburbs, it has a lower median income than most, exemplified by Macquarie Fields which lies inside the bounds of the parish and is a suburb with a troubled history. At the 2011 census, it had 9.9 per cent unemployment, almost twice the national average. In 2005, it was the source of an infamous four days of violent riots within the large housing commission area, culminating in clashes with police, and a state parliamentary discussion.

David arrived at Glenquarie from being an assistant minister at Neutral Bay—one of the richest suburbs in Sydney. When I asked him about this shift, David said that while there’s some systemic problems in the suburb, there’s also advantages to ministering where he is. 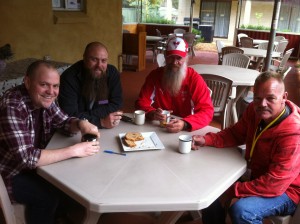 “It’s actually been refreshing coming here because people talk. They talk on the north shore, but people talk about life here much more openly and readily. One of the things I say is people vomit their life here in front of you. It’s a bit overwhelming if you’re not ready for it. But actually, as a minister, you’re desperate for people to talk about reality with you, right?”

He’s clearly proud of the groundbreaking work that Break the Cycle is doing, and the way he’s been able to bring corporate accountancy skills from his pre-ministry career into guiding the non-profit. In the last year, their donations and financial growth has been near-exponential. But ultimately, he said it’s about the people.

“We hear the word family used a lot. And that’s in a culture where, when you read the census data, it’d be hard to find the nuclear traditional family thing … So we’re loving people who don’t have that as the consistent pattern around them. So people are feeling loved: feeling loved at the Break the Cycle, and feeling loved at church.”

However, he also sees the dangers, where, historically, organisations primarily concerned with social action sometimes lose sight of their biblical foundations.

“So, I worked many years ago at the Children’s Society in London. A great charity, doing good work, but which had perhaps, it’s fair to say, veered slightly from its gospel moorings. And I remember an elderly, Presbyterian gentleman … he said to me, in a private conversation, ‘We must always make certain that we never send people to hell with a full stomach.’”

“One of our big principles is, we charge. We charge people for services, we don’t hand out. Handouts do people no good at all. It teaches them to stick their hand out. Our motto is empowering sustainable life choices and communities, by helping people make good decisions …”

One of the people I meet who has been helped by this is Mick.

Mick is an ex-defence force man. After moving to the suburb from up the coast, he made use of the services himself when he was in financial trouble, which led to him volunteering, and then being offered a job at Break the Cycle. He now manages the lawnmowing business as well as the community pantry: a place where anyone can buy $50-$60 worth of food and groceries for a fraction of the cost. At one stage, he begins listing off the amount of food that they’re able to provide, and there’s an evident note of pride in his wavering cigarette-scarred voice. Currently, the community pantry serves over three hundred members.

After that, I chat with Stu and Mark.

Stu Woods is never going to be difficult to pick in a crowd. He’s a Christian bikie, part of a group called the Ambassadors, and he looks the part. He proves to be as nice as anyone you’ll ever meet. Stu works as the chaplain for Break the Cycle, as well as being part-time at St Luke’s in nearby Liverpool.

And he’s passionate about his role in chaplaincy being something that lets him fully love and serve those in the community.

One of the men that he’s met, now involved in Break the Cycle, is Mark. Mark is adorned with a beard that reaches the sort of proportions you don’t usually see outside of movies based on Middle Earth. As he talks, he strokes it constantly. He is dressed in all red: Sydney Swans cap and jersey.

Mark became involved in Break the Cycle through meeting Stu through Anglicare, attending a Bible study called WayOut. When Mark went to prison over Christmas and New Year, Stu offered support at courtside, and helping consult with the magistrate, to demonstrate the support that Mark would have if he was released.

Other services include anger management courses and the Men’s Shed. It’s an inaccurate name, as it’s not simply a shed, but more akin to a professional workshop, kitted out with power tools, drills, lathes, and the like. David said that it’s based partly “on the notion that women engage face to face, and men engage shoulder to shoulder.” It also provides men with an environment where they can do something both constructive and productive, something all the more necessary for someone like Mark who openly admits that he struggles with alcohol and gambling issues.

“I’ve been a Christian for many years, but I’m the classic backslider. But it’s just getting back in touch with what I already know and like. Men’s Shed, it’s meeting new people and just being around that setting is comforting at times.”

“Challenging at other times …” Stu adds.

“Yeah. Yeah,” says Mark, and then he pauses, glares sideways at Stu, and replies, “That’s circumstantial, that is.”

Ultimately, David says that his vision is to show the love of Jesus through what they do to help the people around them.

“In a place like Macquarie Fields, you can’t love and serve Jesus without loving and serving the community. I think that’s true anywhere, but particularly in a place where the needs around us are so apparent. My vision is that we continue to do that. And my vision is that we never lose sight of the imperative for the gospel.”

At the end of my time there, Mark begins talking about hope, and I ask him, “What does hope mean for you?”

“That I can,” he says, “That I can achieve anything I put my mind to.  I got a lot of work to do, physically and mentally. You know, my substance abuse, and my health, still got all that to work on. So I’m a work in progress.”

That is, it’s not about the wheelbarrow, but about what it represents: the work that Break the Cycle is doing. And that ordinary people can, with a bit of hands-on work, come together to be more than the sum of their parts.

Michael Jensen on what can come from malaise