Churches are mourning with congregation members who’ve lost homes in bushfires across NSW, while others are thanking God for sparing their lives and homes.

Yesterday, hot and windy conditions fuelled angry fires in the Blue Mountains, Southern Highlands and Central Coast areas of NSW. Around 100 fires are currently burning across the State, although temperatures have dropped since yesterday, easing conditions slightly.

One of the worst hit areas was Springwood-Winmalee, a normally peaceful area in the lower Blue Mountains. Eternity spoke to Senior Pastor at Springwood Anglican Church, Steve Young, who said they were still in the thick of it.

“There are scores of houses that are burnt down in the community and whole sections like Yellow Rock where there are very few houses left. We know of 10 church families that have lost their houses. There are others that we are trying to contact and are out of contact, so that’s a bit worrying.

“It’s a big deal in the Springwood community, because everybody knows several people who’ve lost their house, and people haven’t been able to get home yet.”

Media reports are estimating anywhere between 30 and 50 houses have been lost in the area, with fires affecting other suburbs right across the Blue Mountains area. At the time of writing, the RFS had issued an emergency warning that fires have flared up in Springwood(for live updates, see the RFS site).

Steve says with many families displaced, and people wanting to help, the church is working to co-ordinate a response.

“At the moment we’re just trying to collect what people will need in the short-term, which is number one, cash, number two, food and just things to distribute to people that they might need in the next days. And after that we’re looking at longer term solutions for people who’ve lost homes and need accommodation.”

Steve says the response from church members has been phenomenal, with many offering somewhere to stay.

“There’s a long list of people who’ve offered beds and rooms and granny flats to people, but it’s something that’s still happening, so it’s hard to get on top of exactly what the needs are. We’re not up the stage of offering words of comfort. We’re just saying, come here and make contact and if you can help.

“We’ve opened the church for people to come and as they come we’ll be able to speak to them and obviously on Sunday people will want the word of God to be applied to the situation.”

Meanwhile, down in the Southern Highlands, south-west of Sydney, the villages of Balmoral and Yanderra were yesterday ringed with fire. The Minister of Bargo Baptist Church, Ray Law, who has a 24-acre property in Yanderra says his village was miraculously spared. 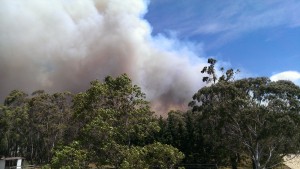 Smoke from the fire at Yanderra

“I’ve just been out and driven around it and there’s no other way you can describe it: the rural fire service girls and guys did an incredible job, but there had to be God’s intervention in this. The ferocity of the fire and the winds were just amazing. But with the exception of one shed being burnt, there has been no property damage.”

Ray stayed home with his wife and son-in-law during the day, moving their animals to safety and collecting their most precious possessions.

“If we had to go we could’ve, but they stopped the fire just the other side of the second farm up. The way the winds were going, it would’ve been into our place I’m sure, but God spared us. It’s just the hand of God. Just incredible.”

“I had some of the other pastors from other churches ringing saying, you ok? We’re praying for you. Can we do anything? You alright? So we had a circle of prayer around us and I would equate that to what saved the village really.”

Ray says at this stage, he’s not aware of anyone from his church being affected, but their hearts are with those grieving in other parts of the State.

“Our hearts and our prayers go out to people and we’ll certainly be having a special time of prayer on Sunday for all of those who have lost and pray for God’s provision for them. Short of losing a loved one I can’t think of anything worse than losing your home.”

The church plans to come up with a strategic plan to use in future emergencies so it can better respond to community needs.

Churches up on the Central Coast appear to be faring well, despite fires continuing to burn in the northern lakes district. Eternity spoke to two ministers up in Swansea whose parishioners had evacuated their homes and were sleeping over at friend’s houses, but both indicated spirits were high.

Colin Grigg, Pastor at New Hope Community Church at Caves Beach said the kids were home from school and everyone was looking out for each other.

“We’ve had some evacuations of our people, but everybody is ok so far. We’ve got some people staying with us at our house. We’re just sheltering them here and we’re all having a good time of fellowship. We’ve just had a big breakfast and cooked up some bacon and egg muffins.”

The Salvo’s School for Youth Leadership college at Lake Munmorah could not be contacted. Lake Munmorah was hard hit yesterday, with one man dying while trying to defend his home.

The Salvation Army is calling for financial donations to its Bushfire Relief Appeal. You can donate through their website.