From nihilism to eternal hope 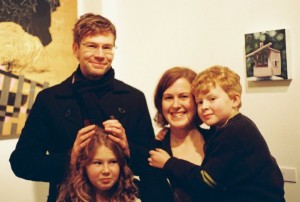 As a school boy, Paul Chew grew in the conviction that there was no hope in life, and nothing after death.

This belief led Chew into a lifestyle of drugs, expulsion from the private Anglican boys’ school he attended, to a drop-out in his final year in a public high school.

“My background was nihilistic,” says Chew. “For me, it was not a sudden ticking of the box ‘I am a nihilistic atheist’, but a strengthening belief that we’ve come from nowhere, there’s nothing after death, there’s nothing we ought to do in life; so why not do what I want to do.” As this attitude was coupled with taking drugs, beginning at a fairly early age, it became more and more true for Chew that, “there was nothing at all morally or existentially that I ought to be doing and that was worth doing.”

Drug-ridden, Chew rarely attended school during his final year. It was a time of great change for Chew. He decided to return the following year to complete his schooling.

“While I was taking drugs, I came to a point where it felt like God was there; I realised that he had actually always been there, but I’d been denying it.” Chew’s girlfriend Jo had been to church a couple of times with friends. Chew started reading the Bible and learning about Jesus for the first time. It was the beginning of a long process.

“Through meeting Jo and her friends, meeting other Christians, and reading the Bible, I found that it made sense. The more I learned, the more sense it made.” Though he had sometimes attended church at Christmas and Easter growing up, and attended an Anglican school, Chew reflects that he started to get to know God as a complete stranger.

“Jo was the first person I met who believed that there was a God,” Chew remembers. “She wouldn’t have called herself a Christian then. It was a tricky time of change for us. Neither of us were Christians, then both of us were. We went through various times of encouraging one another and also pulling each other back.”

Over about a year, Chew became a Christian. That year was a process of “finding out about God, knowing God, being sincere, and then screwing things up. I began responding to the knowledge that I had. At the beginning of the year I wasn’t a Christian, but by the end of the year, I had come to know that Jesus had died for me and I was living with him as my Lord.”

As Chew then returned to school for his second final year, he was a new person. “I’d known people the year beforehand as ‘evil Paul’, but now there was quite a dramatic change in how I looked and acted and talked.”

Chew went on to do an Arts degree at the University of Tasmania majoring in Philosophy and Indonesian. His focus at university, however, was not on course work – but on Christian ministry.

“I was still so excited about becoming a Christian; there’d been such a dramatic change for me. I’d gone from thinking that Jesus was a myth created in order to get people to do things, to believing that Jesus is real, he’s true, and he’s someone we all need to come to terms with.”

“It was such a change in my life. I wanted to talk to people about Jesus far more than learn about modern Indonesian literature. At that time I was more concerned with evangelism than philosophy.”

After finishing university, Chew started working for the Presbyterian Church he attended. At the time of Chew and his girlfriend Jo’s conversion, quite a few other people from non Christian backgrounds also came to faith through the ministry of two key couples in the church. At the time Chew finished university, one of the couples had to return to England, and the husband of the other couple turned away from his Christian faith. Chew found himself moving into a mentoring gap in the church community.

“I was still a relatively new Christian myself, but I found myself in a position of having to care for people who had become Christians shortly after me,” says Chew. “So it was an obvious step for me at the end of uni to just continue to do the same thing, caring for people, and teaching them.” From this pastoral role at his church, Chew moved quite naturally to Bible College, to equip him to further work in churches. He attended Moore Theological College in Sydney and graduated in 2006, then moved back to Tasmania to minister in churches there.

Chew went on to marry Jo, and they have two children, ten year old Molly and seven year old Ezekiel. As an associate minister of St George’s church in Battery Point, Hobart, Chew believes that his early years as a Christian equipped him well for the work he does now, as he cares for people as they become Christians, and grow in their knowledge and love of God. “Those early years equipped me well. Christian ministry wasn’t so much of an ‘ideal’ for me; because I’d had my gifts tested already by putting them to work at the get go.”

Reflecting back on his story of coming to faith, Chew says, “Knowing that God can save me gives me confidence that he can save anyone.”

How PTSD changed my view of God