Get on board the mobile cafe bus

Perth radio announcer John Donoghue is running a crowd-funding campaign to realise a long-held vision to turn a double-decker bus into a mobile coffee shop to help people in the community.

Donoghue, who has been in Christian radio for more than 22 years, has raised $15,000  to buy a 1975 double-decker bus for his Big Bus Coffee – Coffee With Heart project.

He is now seeking donations to fit out the bus, which is currently half converted to a mobile home, so that he can use coffee as a way of connecting with people and partnering with groups that want to use the bus for activities such as an Alpha course or soup kitchen, fete or festival.

“I hope to make this a social enterprise and help people get a step up into work as baristas or into the vast hospitality industry, while also providing a platform to help people in need in other ways,” says Donoghue, who works as an announcer with Christian radio station 98five Sonshine FM. 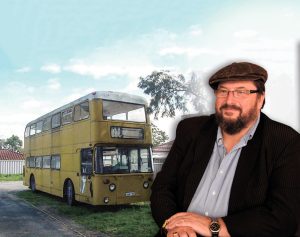 John Donoghue with the 1975 bus he plans to convert to a mobile cafe.

“One of the aims is to offer the best quality coffee and food to paying customers to fund outreach and connection to those in the community who need a leg up, a warm drink, a friendly chat, or somewhere to chill out for a while.”

Donoghue says he came up with the idea when a bus he used to drive 29 years ago as a charter vehicle came up for sale.

“I drink a lot of coffee, and have a love of people, a love of chatting and connecting with people.

“Coffee provides a great medium for people to come together to connect, chat, chill out, and become friends. My heartfelt goal has always been to value people and show them respect by providing time for them and a platform for them to gather. The bus will be that platform, with a kitchen and servery downstairs and seating upstairs.”

Donoghue says the venture is a “real step of faith” because he has never done anything like this before.

“I’ve done a barista course and have a friend who runs a coffee shop but it’s essentially me going ‘Let’s see what happens’ and allowing God to open some doors.

“It’s a fairly expensive project but we want to source materials from the best place we can for as little as possible.”

Once the funds are raised, Donoghue says, he has an army of people ready to help, either with refurbishing the bus or working alongside the project.

“I had this vision about five years ago after I got married and I’ve been slowly working away,” he said.

“I did some crowd funding research on Kickstarter and found a couple in Oklahoma City who doing exact same thing, called Junction Coffee. They launched in September, and they’re having a ball.

“I’ve let it go quite a few times, and I’ve said, ‘God, if this is not from you put it aside,’ and it just keeps on coming back.”

I was innocently sitting in a cool Melbourne cafe, when...