Bob Day, Family First Senator for South Australia, has criticised the tactics of Christian protest groups in the ongoing debate over refugees.

Last week, both houses of parliament narrowly passed changes to the Migration Act 1958, in the Migration and Maritime Powers Legislation Amendment Bill. The changes include the introduction of a new definition of the word “refugee”, which no longer includes a commitment that no person should be returned to a country where they may be persecuted (called “non-refoulement”). The Bill also sees the reintroduction of Temporary Protection Visas (TPVs) which grant refugees protection for up to three years, but provide no right to settle in Australia permanently.

The Bill was passed narrowly in the Senate, with Immigration Minister Scott Morrison promising to increase Australia’s refugee intake by 5,000 and to release 108 children from detention on Christmas Island.

Christian senators have been split by the Bill, with Senator Bob Day from Family First voting for it and independent John Madigan voting against it.

Speaking against the Bill last week, Madigan told the Senate he felt he was at a “stalemate” with the government on the Bill.

“I want people to be crystal clear that I genuinely want to find the solution to the problem of asylum seekers and what they are experiencing… in the end it is about people and you cannot commodify people. They are not numbers; they are people. At this point, I cannot support the government’s legislation as it stands… There are a lot of people in this place who are looking for a genuine and a just outcome.”

Senator Day says debate on the Bill was “the toughest I have had to handle in my six months in office, but not because the decision on which way to go was difficult.”

“Once we had convinced the Government to increase its migration intake, and knew children would be released from detention and the detention centres would close, we were happy.”

“No, the task on this legislation was made difficult through the protest tactics of asylum seeker protestors and some Christians who, I have to say, have said the most appalling things to me in response to our vote on this Bill.”

Senator Day told Eternity that under the Labor Government, 1,200 men, women and children died at sea and 400 boats arrived on Australian shores bringing 30,000 people “that the taxpayer had to spend billions dealing with.”

“The stories of those who came by boat are heart-breaking, but so are the stories of those who can not afford to get here while our borders are in disarray. It is a cruel burden in office to look beyond the short-term painful stories to the long-term and wonderful benefits of a comprehensive border protection policy with an increased migrant intake, but that is precisely what Family First has done.”

Senator Day said asylum seeker protestors had been spreading “misinformation” and that he and his supporters had been attacked for his vote and told to “burn in hell”. He said it was the type of rhetoric that “drives non-Christian politicians away from heeding the Christian perspective we need to hear more of in the public square.”

Matt Anslow, speaking on behalf of the #LoveMakesAWay movement, who have been peacefully protesting the Liberal Government’s asylum seeker policies this year, said he was disappointed to hear about the negative comments made against Senator Day and other Senate crossbenchers and says confidently that such attacks had not and would not come from their movement.

“We believe personal attacks and speculation about people’s faith are always out of line, and do nothing to promote healthy debate or compassion for asylum seekers. We agree that judgemental rhetoric does nothing to help the reputation of the Church in the public square,” Anslow told Eternity.

“We hold no ill will against any of the Senators who were put in such a difficult position when voting on the Migration amendments… We do, however, respectfully disagree with Senator Day on this issue.”

The #LoveMakesAWay movement voiced that disagreement during nationwide prayer sit-ins held on Wednesday this week, with 53 Christian leaders arrested or forcibly removed from the offices of seven members of Parliament, including Immigration Minister Scott Morrison, Attorney-General George Brandis and Foreign Minister Julie Bishop.

Christian leaders from the Pentecostal, Presbyterian, Baptist and Anglican denominations involved in the action said the sit-ins were in response to reports that the Government is planning to send 25 babies, born in Australia to asylum seeker parents, to the Nauru detention centre. 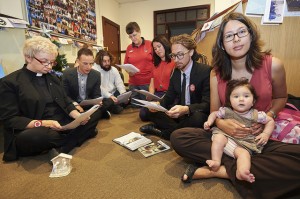 The #LoveMakesAWay protestors in Foreign Minister Julie Bishop’s office in Perth were arrested for trespass and strip searched by WA police.

22 sit-ins have been held in 2014 as part of the #LoveMakesAWay movement, with Christians from many different denominations around the country participating to protest the Federal Government’s asylum seeker policy and ask for the release of all children from detention.

“At Christmas, how can we celebrate the birth of Jesus who quickly became a refugee fleeing persecution, and not speak out for these 25 babies whose families have also fled persecution?” said the group’s spokesperson Kate Leaney.

Almost all sit-ins have resulted in arrests, with over 100 Christian leaders arrested this year. But most have been released without charge.

Yesterday, 8 Christian leaders from Perth and 5 from Adelaide were arrested and charged with trespass.

In Perth, where the sit-in was held in the office of Foreign Minister Julie Bishop, the protestors were strip-searched for drugs and weapons after being arrested. Protestors were threatened with the strip-search when being told to leave.

The Perth protestors, which included a mother praying with her baby daughter, the Rev. Lorna Green, the Anglican parish priest at Serpentine Jarrahdale, and Jarrod McKenna, the director of newly formed Christian advocacy group Common Grace with his wife Teresa Lee, were stripped naked and told to “squat and cough” during the searches.

Many in the Christian community have expressed outrage at the strip searches executed by the WA Police. The Uniting Church in Australia released a statement condemning the action.

“Strip searching is an outrageous and offensive response to Christian concern for the vulnerable, and I will be seeking an urgent explanation from the WA Police Commissioner,” said Moderator of the UCA Synod of Western Australia, Steve Francis

Teresa Lee from WestCity Church of Christ, and co-founder of the First Home Project with her husband Jarrod McKenna, was one of the protestors strip-searched. She told supporters on Facebook: “Even if you strip-search us, even if you make us squat and cough, even if you threaten us, we will not stop fighting for freedom for these precious babies.”

The WA Police told Eternity that police upon arriving at Julie Bishops office negotiated with the protest group for “more than an hour”.

“They were fully advised they would face charges and as such undergo standard procedures at the Perth Watch House if they did not comply,” a spokesperson from the Police Media Unit said.

Julie Bishop has been in Lima, Peru for UN Climate negotiations, but said of the protests that the protestors were “allowed to remain in my office for nine hours and offered tea and coffee. They were encouraged to leave peacefully before WA Police arrived to remove them at the end of the day,” according to WAToday.com.au.

Scott Stephens is the ABC’s Religion and Ethics online editor, and the co-host (with Waleed…

Scott Stephens is the ABC’s Religion and Ethics online editor, and the co-host (with Waleed…