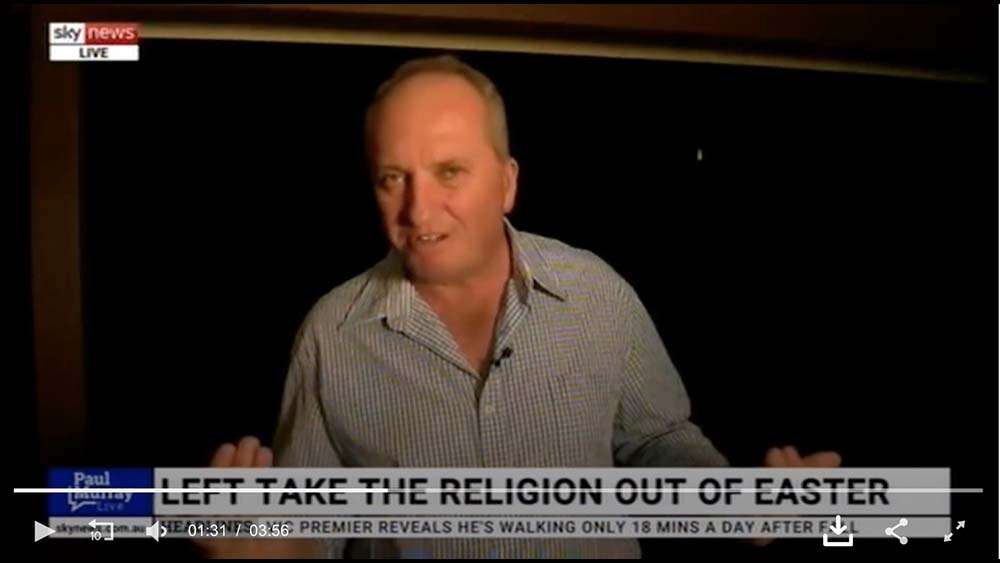 They were reporting the results of a McCrindle survey, commissioned by the Centre for Public Christianity (CPX).

“The results suggest that, as a nation, we may not be as sceptical as we think we are,” CPX researcher Natasha Moore wrote on the ABC website.

“In an interview in 2005, the poet Les Murray was asked how comfortable he felt with being ‘an eccentric Australian voice, a rural poet speaking for an urban culture, a Roman Catholic speaking for a largely secular people’. He responded:

“‘I just speak as I am. I am a Catholic and I don’t believe that other people are necessarily secular. I think that intellectuals are mostly secular or are required to pretend that they are. But broader people are very varied …'”This new survey backs up Murray’s intuition.”

The survey found: “on the question of miracles: roughly a third of people (31.2 per cent) responded ‘I believe this exists’; almost another third (29.1 per cent) said ‘I am open to the possibility that this exists’. Some opted for ‘unsure’ or ‘unlikely’, but only 13.8 per cent were willing to say they did not believe there’s any such thing as a miracle.

Natasha Moore pointed out the part of the survey that secularists might find hardest to accept: “Surprisingly, perhaps, it was the youngest age group — 18-26-year-olds — who expressed the most openness to the non-material: 49 per cent said they believe in the soul, and 48 per cent in life after death (in both cases, another 28 per cent were open to the possibility).”

Mediawatch poked a great deal of fun at Skynews for reporting the survey as some sort of anti-Christian-ABC desecration of Easter.  They had juicy quotes from commentators who had not realised that the CPX survey was good news for Christianity.

Thanks to Mediawatch, the CPX Survey made it to prime time on the main ABC channel.

CPX like Eternity is part of Bible Society Australia, so we asked our colleagues about their survey,

1.     Why did you commission this research (particularly, why did CPX want to take Australia’s pulse on these particular subjects)?

CPX aims to speak to our secular culture and to communicate in a way that connects with where people are at, so as to communicate effectively. Surveys like this are part of that mission and help create a picture of what people think about God, the church, Jesus and how open or closed they are to spiritual questions. We all have our thoughts on what Australians believe but it’s good to actually ask some people! Additionally, it felt like Easter was the right time to gauge people’s openness to belief in the resurrection of Jesus, and how the public view the influence of Christianity and the church.

2.     What are the headline findings and/or most surprising?

A second headline would be the amount of people who say they are unsure or don’t know what to think. For example, on the specific question of what people believe about Jesus’ resurrection, over 28 per cent said they just don’t know (but 43 per cent think it is either certain or they are open to it as a possibility). In general, for questions about any spiritual beliefs, there are 15 per cent or more who are unsure what to believe.

A final headline relates to the way Christianity is perceived in Australia in various areas of life. The strongest perceptions of positive influence were related to the charity sector (70 per cent positivity) and education (57% positivity). But the strongest perceptions of negative influence of Christianity were in the areas of politics (39 per cent negativity) and the media (37 per cent negativity). None of that is surprising!

3.     What has CPX learned about Australia’s attitudes to the supernatural?

There are a few key things to consider. First, Australia might be steadily disaffiliating from religious institutions, but that does not mean all Australian’s are closed to the possibility of a nonmaterial reality. The high proportion of people who indicate that they don’t know what they believe could be an indicator of a number of things. For some it might reflect apathy. But for others it might indicate how disconnected they feel from the Christian story.

A second key finding pertains to age. We found stronger openness to spiritual beliefs among 18–26 year-olds. Indeed, the most sceptical cohort was 57–75-year-olds, or what we might class as Baby Boomers. Young people may well be exhibiting a spiritual hunger even though it is ill-defined and vaguely directed. For what it’s worth that would cohere with my observations.

4.     How might Christians respond to the findings of this research?

It’s encouraging (to me at least) to know that, despite our increasingly secularised society, people remain open to spiritual questions and the possibility of transcendence. In Australia we tend to be good at distracting ourselves from the deeper questions of life and have quite an impoverished means of conversing about those questions. But we are not entirely closed. People are people, with longings that go beyond the material aspects of living. Christians should be encouraged to have conversations with their friends about meaning, purpose, and how Jesus might relate to those topics. We believe, of course, that the gospel powerfully addresses the desires of our hearts and that hasn’t changed, despite the move away from church and religious observance.

5.     What hope do you see for more Australians coming to belief in Jesus, based on the research findings?

It’s good to remember that, despite appearances to the contrary, we are not a nation of hard materialists. We might be very good at living like there is no God and pushing questions of eternity to the back of our minds, but they keep bubbling up. Many people are open to miracles, and an objective meaning to life. They are pretty sure we have a soul and are more than just physical beings. They are not even shut off from the possibility of Jesus’ resurrection. The challenge is to connect people to that big gospel story in a way that resonates with their deepest longings and desires.