A celebrity-endorsed campaign for a slimmed down Safe Schools anti-bullying programme, stripped of its ideology has crashed after less than two days. According to the Sydney Morning Herald, singer Missy Higgins, comedian Joel Creasey and actor Guy Pearce were among those joining a campaign for a federally funded school programme to tackle anti-gay bullying and prevent domestic violence.

“In a concession that the Safe Schools program went too far in antagonising conservatives, the group has shunned gender theory, equality or even ‘acceptance’ in favour of a much more benign demand: tolerance,” the Herald reported.

The idea was to send a letter to the Prime Minister and Education Minister that sought funding to be allocated by the Turnbull government to roll-out a national anti-bullying, anti-violence program across Australian schools with an LGBTI focus at its core. A milder version of the Safe Schools programme, if you like.

Organised by former Sydney Morning Herald and The Age technology editor Ben Grubb, the letter was met with unexpectedly severe backlash on Twitter.

Gay activist Michael Barnett, who made waves over his relentless criticism of major organisations for employing someone with ties to the conservative Christian group, Australian Christian Lobby, was one of the people who loudly denounced the letter and its suggested programme of tolerance.

On the feminist site Daily Life, writer Maeve Marsden responded, “As one of the ‘certain members of society’ the petition regards, I will not be satisfied by mere tolerance. Tolerance does not lead to equality and it does not lead to understanding.”

“Concerns with ‘Safe Schools’ has always centred on the gender fluid ideology it teaches children and it is great to see it being recognised that this is a problem.” – Lyle Shelton

The backlash on Twitter included this comment, “When the latest #safeschools letter calling for tolerance of LGBTI people gets a glowing endorsement by the ACL you know someone’s ****** up.”

One celebrity listed on the petition claimed not to have signed it. 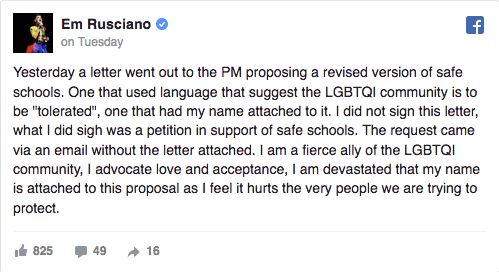 Em Rusciano claims to not have signed this petition Facebook

So severe was the backlash, Grubb withdrew the letter and issued a public apology.

“One of the biggest mistakes I made— and it was made by me alone — was in the drafting of the letter, with the word ‘acceptance’ omitted from the framework proposed for teaching, and the letter referring to not seeking seeking ‘approval’ of the way certain members of our society live.

“Instead, the words ‘tolerance’ and ‘mutual respect’ were used.

“I made the decision to omit the word highlighted above. This is a decision I deeply regret and I am truly sorry for. I am sorry to the lesbian, gay, bisexual, transgender, and intersex community, many of whom have told me that by doing this represented the letter pandering to conservative views,” Grubb wrote.

After the initial letter was released, the Australian Christian Lobby put out a statement, possibly prematurely, headlined “How We Are Moving Closer To Agreement On Anti-Bullying,” announcing they “cautiously” welcomed the celebrities’ proposal, but adding that parents should be the primary stakeholders to be consulted.

“It was the founder of the program Roz Ward that said Safe Schools actually had nothing to do with bullying and was all about promoting gender diversity,” ACL’s Lyle Shelton reminded everyone.

“Concerns with ‘Safe Schools’ has always centred on the gender fluid ideology it teaches children and it is great to see it being recognised that this is a problem.”

The change.org petition promoting the push for a milder Safe Schools programme has now disappeared.