Artist Megan Robert won the $25,000 first prize in the Mandorla Art Award for a work which literally meant taking apart the Bible in order to tell the story of Jesus.

A basket made from the pages of three Bibles has won a major art award.

“The judges were impressed that her artwork expressed the presence/absence/presence mystery of the resurrection through the story of the journey to Emmaus (Luke 24: 13-35),” Angela McCarthy, the award’s chairperson, told Eternity. “The basket is made from the pages of three Bibles carefully rolled into scrolls and then machine sewn together with red thread in a very long and meditative act. The act of Jesus emptying himself to be the Bread of Life for us all is richly expressed through the basket and has in its structure five openings to represent the wounds of Christ. That the person of Jesus becomes the Word that burns in our hearts and feeds us in our faith journey is very evident.”

McCarthy teaches theology at the University of Notre Dame Australia in Fremantle.

The Mandorla Art Award for contemporary religious art – Australia’s most significant thematic Christian art prize – attracts some of the country’s finest artists, with John Coburn a previous winner. The first prize of $25,000 is sponsored by St John of God Healthcare.

“In approaching the theme of the resurrection, I felt that it was important to convey both death and new life in the piece,” she tells Eternity. “A vessel or container is a great metaphor to capture the paradox of absence and presence that Rev Dr Timothy Costelloe spoke about in his commentary.

“I didn’t set out to make a bread basket. I initially had thoughts of a water vessel but as I stitched and stitched, the material refused to do what I wanted it to and I had to let my idea go.

“Instead of water, it spoke to me as bread.

“I read and reread different accounts of the Resurrection but Luke 24, the road to Emmaus really captured my imagination, especially the part where Jesus is fully recognised as he breaks the bread.”

Megan Robert was inspired by the words of Timothy Costelloe, the Catholic Archbishop of Perth. He wrote of being intrigued and having his imagination captured “by the paradox of absence and presence” in the resurrection.

“You can only hope to have any understanding of the meaning of the resurrection if you contemplate it by looking back at the crucifixion and death of Jesus. There could be no resurrection had there been no death. And at the same time the resurrection is, in a strange way, the prelude to the ascension of Jesus, his return to his Father in heaven.” 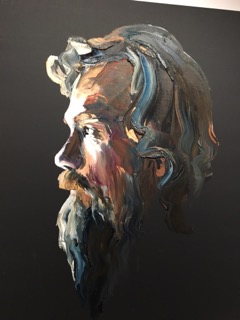 Eternity asked Megan Robert if taking apart three Bibles to make her artwork was a problem.

“Yes I used the Bible, I took out every page, rolled them up so the pages can’t be used for what they were intended. The Word of God cannot be read. Only a glimpse is possible. It was like I was killing or sacrificing Jesus, bit by bit.

“It was a humbling experience but conceptually I needed to do this for the work. Like Cleopas and his friend on that Sunday, their script had become undone and all mixed up.

It’s because it’s a precious thing, a Holy book, that I used it. It’s a very real and concrete material that is loaded with meaning.

“In the stitching, a new narrative starts to form, the death starts to give birth to Life as Jesus slowly reveals himself to the two. Jesus takes their undone script and on their journey, the rolled up pages of death open but in a new way.”

Another entrant this year was comedian and artist Anh Do who painted a profile of Christ.

This year Bible Society Australia (BSA) was a sponsor of the award for the first time. “Bible Society is delighted to support the Mandorla Art Award in its 18th year, BSA CEO Greg Clarke tells Eternity. “We love to see the impact that the Scriptures have on people’s creative expression, and this year’s impressive artworks demonstrated again the depths of meaning people find in the Bible’s teachings.”

The Mandorla Art Award entries are on display at the Linton & Kay galleries on St Georges Terrace in Perth. They will tour to the New Norcia gallery in outback WA where a people’s choice award will be announced.

Be stunned in Perth by a modern masterpiece of sacred art