The case for Trump

Let’s begin with a thought experiment.

Imagine you live in one of the democracies that have been worst hit by COVID–19.  It might be China, the US, Britain, Italy, France or Israel. Now imagine yourself back to the tipping point in time when the pandemic was obvious, there was still time to do something early, and there is a national election.

Would you vote for the leader that said “it is business as usual”, or the Jacinta Ardern style leader who said “we’ll lock down hard and early?”

Assuming many readers went with Jacinta, perhaps this exercise can help us look at why Christians support Trump.

COVID deaths in the USA are racing towards 225,000. If saving many of those lives would have swayed your vote, consider that the Guttmacher Institute – a research group that supports abortion rights – counted 862,000 abortions in the U.S. in 2017, according to the Associated Press.

And making another assumption – that you believe that what or who lives in the womb has the rights of  a human being, or even just that some of them have those rights – which leads to the observation that killing them is murder, and the case for Trump becomes clearer.

With the likely appointment of Amy Coney Barrett to the Supreme Court, many Christians will see President Trump as finally cementing a conservative goal that will lead eventually to over turning the Roe v Wade decision that legalised abortion across his nation.

Trump’s release of 25 possible Supreme Court judges, picked with the help of a legal lobby group, the Federalist Society, during the 2016 campaign helped cement conservative Christian support for him. Asked whether Roe v Wade should be overturned during a debate with Hilary Clinton, he replied: “That will happen, automatically in my opinion,” – because of the Supreme Court justices he would appoint.

The issue for some conservatives is how quickly the court will act, with many observers suggesting that it will act slowly to overturn a precedent, even one as contested as Roe v Wade. So the argument goes that even more Trump appointments are needed to make sure. (Not every justice ends up voting the way the president that appointed them would wish. The former Justice Kennedy, although appointed by Ronald Reagan, sided with the liberal judges on abortion and same sex marriage. It is his former law clerk, Brett Kavanaugh who has succeeded him – another controversial Trump appointment to the court.)

Were it not for Roe v Wade, abortion would be a states rights issue and not part of a Presidential election. Since it is, the abortion issue has long been used to win Christian votes to the Republican party. When the party adopted an anti-abortion policy in 1976 it was seen as an attempt to capture the Catholic vote, but it fostered the growth of an Evangelical voting block, now more important to the party than the Catholics.

Also in 1976, the “Hyde amendment” – which bans Federal funding of abortions – was passed by Congress. It too has extra symbolic  importance in the 2020 race. After decades of supporting it, Biden announced in 2019 that he had changed his position – in effect becoming a pro-choice candidate.

A second reason that many Christians support Trump is foreign policy.  Trump is the first president since Jimmy Carter not to commit American troops to a fresh fight overseas. His 2016 opponent Hilary Clinton had a reputation for being a foreign policy hawk. A third term for the Clinton family may have seen the deployment of Americans overseas, maybe to sort out Libya or to defend the Kurds. We’ll never know.

Foreign policy is one area where Trump has kept (some of) his promises – NATO allies are spending more to defend themselves, and he has given Israel support – a vote winner for many US Christians. Under Trump, the State Department has elevated the issue of persecution of Christians overseas.

But it is a the fear of “persecution” of Christians at home that may drive Evangelicals and Catholics to vote for Trump. A Catholic social service agency has been excluded from Philadelphia’s foster care program for not accepting same-sex couples as foster parents is due in the Supreme Court on the day following the election. The U.S. Conference of Catholic Bishops, the Pennsylvania Catholic Conference, and a few Catholic Charities agencies have joined the case to argue that ‘Catholic Social Services of the Philadelphia Archdiocese’ should be able to run an adoption program for married heterosexual couples only. On the other side, local officials have been backed by the American Civil Liberties Union, with wins in the lower courts.

One state in the US has achieved a settlement between LGBT rights and religious freedom – “The Utah compromise” negotiated between LGBT community leaders in Utah and the Mormon church. LGBT rights to non-discriminatory workplaces has been legislated, but religious institutions have an exemption. But libel cases that emerge from all this will ultimately be tested in the court system. All roads lead back to the Supreme Court. Will a 6-3 margin – with the addition of Amy Coney Barrett to the bench – be enough?

The case for Biden

Let’s begin with a graph. 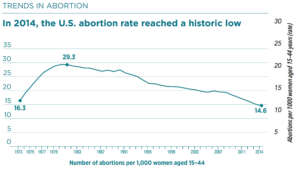 Abortion has been declining in the US and the rate of abortions is now lower than in 1973 when the Roe v Wade  decision was made. After the end of this graph, that the decline continued through the Obama administration, and into the Trump era. 2017 is the latest year for which stats are available).

The graph shows that the decline has continued under both Republican and Democrat presidents. The slope of the graph does not change enough to conclude that one party is more effective at reducing abortions than the other.

The reasons are complex and may include:

This suggests that legislation is one of the weaker influences in reducing abortion.

A President Biden is likely to preside over a lower rate of abortion, whatever happens on the Supreme Court.

He might even reduce abortion further than Trump. Defunding Planned Parenthood, while a major battlecry for conservatives, will reduce access to contraception services too, and although it sounds counter intuitive, may increase abortions.

There is a conservative case for supporting Biden, due to Trump’s corrosive effect on institutions of government and conservatism itself. “President Trump is a huge embarrassment,” says Southern Baptist leader Albert Mohler in an interview with the New Yorker, even as he says he is a reluctant Trump voter.

Mohler is ‘reluctant’ because he sees Trump being destructive of conservatism, and a repair job is needed, in 2020 or 2024, whenever Trump leaves office. Civility in public discourse needs to be restored. The long term health of conservatism will need to demonstrate credible opposition to racism, and a healthier regard for marriage. So there is an argument for starting that repair job early, especially with the argument about establishing a conservative majority on the Supreme Court all but won.

Health will be the number one reason centrist voters support Biden. Biden has outlined a coronavirus programme that respects the views of scientists like Dr Anthony Fauci and takes masks, social distancing and contact tracing seriously. And, with 221k deaths in the US – and infection rates now rising in every state – having a government with a plan to keep Americans alive in the pandemic is a Biden distinctive for Christians who are, after all, pro life.

Health insurance may be an even bigger issue.  While Trump backs a court case to strike down the Affordable Care Act (ACA – often referred to as Obamacare), Biden will preserve the gains for the ten million Americans who gained health insurance under the ACA. He will expand Medicaid (coverage for low income earners) in States that did not take up an Obama era offer, and raise the income limit.

Biden will offer all Americans the ability to buy into Medicaid, and lower to 60 the age at which people become eligible for Medicare – so many more older people will be covered. A government option for insurance will be offered across the country. It’s not as universal as Australia’s health coverage, but moves the US closer. Coverage for US voters with pre-existing conditions will continue under Biden ­ making it the ‘big ticket’ item for many and and likely responsible for Biden’s high ratings among older people.

But most voters for Biden will have other reasons. Returning the US to the Paris accords, and a policy of reducing carbon emissions with net zero emissions by 2050. Signing the Trans Pacific Partnership – joining a trade treaty that Australian exporters will welcome. A coronavirus programme that respects the scientists like Anthony Fauci, that takes make, social distancing and contact tracing seriously. raising the Federal minimum wage to $15 an hour.

On race, while Trump does not believe there is systemic racism in police forces, Biden will not “defund the police” but offer incentives to raise standards and reduced incarceration. Plus his VP running mate, Kamala Harris, is the daughter of Jamaican and Indian parents – a significant representative at a time as the nation wrestles with racial reconciliation. Those Christians who believe that racism is America’s Original Sin will give weight to that Biden distinctive.

The Supreme Court of the United States looks like getting a new Bible-reading Associate Justice.…