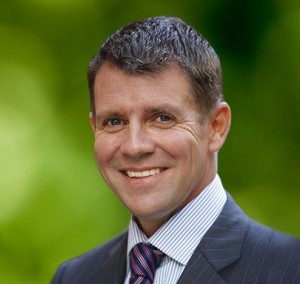 Former Premier Barry O’Farrell resigned yesterday after it was revealed he’d misled an ICAC inquiry over the delivery and receipt of a $3000 bottle of Grange.

Mike Baird, who’s been NSW Treasurer since the Liberals were elected in 2011 was touted as the front-runner for the position of Premier as soon as O’Farrell resigned yesterday morning. He was elected unopposed this afternoon.

Baird, 46, attends an Anglican church in his electorate of Manly (a beachside suburb of Sydney). Senior Minister at St Matthew’s on the Corso, Bruce Clarke told Eternity Baird is a strong Christian man.

“Mike Baird is a man with a real Christian faith in the Lord Jesus and a genuine concern and compassion for people of all walks of life. He is a regular worshipper here at St Matthew’s with his family,” said Clarke.

Baird recently wrote for the Sydney mission campaign “Jesus Is…” website about his hope in the risen Lord:

Jesus is my hope!

I think all of us on a daily basis have trouble focusing on what really matters. Whether it be the challenge of family stresses (heightened when teenagers arrive!!), the morning commute, an over-bearing boss or screaming customers each day appears more a daily wrestle than a joy to live!

I have to be honest that there are days when I wake and feel so overwhelmed about what awaits me that I am gripped not only with fear but a searing sense that I am not up to the job.

It is often at this point I am reminded of Jesus. Not just Him but a reminder that he died on a cross for me. As this reality floods my being I can see the way through the day and the morning haze is replaced with a steadfast purpose. Indeed the scope of hope is much deeper as not only is there an assurance of support despite my frailties there is also a reminder that I have eternal life!”

Baird has a long association with the Anglican church in Sydney, having been part of the youth ministry at Christ Church St Ives Anglican. It’s understood he met his wife through those circles as a young man. They have three children. His father, Bruce–also a Christian–is a former deputy leader of the Liberal Party.

Not one to shy away from his faith, Mike speaks regularly at Christian gatherings about how he straddles faith and politics, and has spoken openly to the media about his Christian beliefs. He told Parliament in his maiden speech, “My faith will ground me, shape me and provide my motivation to serve.”

In an interview with Bible Society CEO Greg Clarke for the Centre for Public Christianity back when he was first elected to Parliament, Mike said his faith was key to his conception of the politician as servant, and that he looks to heroes like William Wilberforce and Martin Luther King Jnr for inspiration.

“Really, if you do look at the Christian faith, it is the essence of service. So we have the son laying down his life for all of us, and that’s the model for all of us.”

Before going into politics, Mike worked in banking, before leaving the corporate world to study theology at Regent College in Canada. At the time, he says, he thought he wanted to become a Minister. However, it wasn’t long before he realised politics was his passion and became state member for Manly in 2007.

David Hutt, NSW Director of the Australian Christian Lobby says he’s met Mike Baird a number of times and welcomes his election to the position of Premier.

“We congratulate him on this. For anybody being elected leader of their party as Premier, that’s a high honour.

Baird is known for his socially conservative views, including being pro-life, anti-stem cell research, anti-euthanasia and against changes to the marriage act to recognise gay marriage.

The Australian Christian Lobby’s David Hutt says they’ve been “very pleased” with the positions he’s taken in the past in conscience votes, although they “don’t take sides between political parties or leadership ballots.”

“We’re happy to work with whoever is in the job. But certainly, Mike Baird is someone who hasn’t made a secret of their faith. And I know a lot of Christians have been encouraged by the position he’s taken in a number of social debates in the Parliament,” said Hutt.

In his interview with the Centre for Public Christianity back in 2008, Baird told Greg Clarke he wanted to be remembered for three things:

“If someone came to me at the end of my journey and said Mike acted with integrity, passion and achieved results for his community and his State, I would be very proud.”