Gender Bending? Transgender not as black and white as we might think

Transgender refers to a person who wishes to or has identified with the opposite sex, often through hormonal treatment or sex reassignment surgery. A popular characterisation of a transgender person is that he or she is a woman trapped in a man’s body, or vice versa.

Mark Yarhouse, Professor of Psychology at Regent University, Virginia, and author of Understanding Gender Dysphoria: Navigating Transgender Issues in a Changing Culture, says, “gender dysphoria refers to deep and abiding discomfort over the incongruence between one’s biological sex and one’s psychological and emotional experience of gender”.

If you have just read that description and feel as though your mind is spinning with questions, objections, and a general sense of unease, you are not alone. This issue is fraught, and we all have a lot invested in the truth, or otherwise, of the answers we come up with.

There are at least three things we need to consider.

In the face of transgender people it is easy for Christians to hold up biology as a trump card, after all, “God created mankind in his own image, in the image of God he created them; male and female he created them” (Gen 1:27). For Christians, biology should not be malleable.

Here’s the problem: biology actually is malleable. Doctors today can remodel a male body into a female body and vice versa. Whether or not they should be able to is a different question beyond the scope of this article, and in a sense it’s a moot one. We have the technology to do it, people are doing it, and it’s not going to stop any time soon.

Malleable biology is not a disregard for the importance of sex difference, but a pinning of all their faith in the finality of the male-female distinction.

We must be careful here. To the transsexual who undergoes sex reassignment surgery, malleable biology is not a disregard for the importance of sex difference, but a pinning of all their faith in the finality of the male-female distinction.

Caitlyn Jenner did not seek to become asexual (though she now identifies as such), she wanted to cease being a man, and start living as a woman, with the biological richness that this includes. But womanhood is more than having breasts and a vagina, as Elinor Burkett pointed out in an opinion piece in The New York Times:

“Their [transgender peoples’] truth is not my truth. Their female identities are not my female identity. They haven’t travelled through the world as women and been shaped by all that this entails… For me and many women, feminist and otherwise, one of the difficult parts of witnessing and wanting to rally behind the movement for transgender rights is… the notions of femininity that they’re articulating, and their disregard for the fact that being a woman means having accrued certain experiences, endured certain indignities and relished certain courtesies in a culture that reacted to you as one.”

Being a woman (or a man for that matter) is not as simple as getting some new parts, some new clothes, and crossing over to the other side.

Regardless of whether your gender identity is male or female, there are certain privileges and disadvantages that are associated with embodied maleness and femaleness. There is a gendered history of male and female that cannot be taught; to live it is to learn it.

However, that reality has not stopped people undergoing hormone therapy, cosmetic surgery, and even sex reassignment surgery.

Whether or not Caitlyn Jenner inspires or repulses you, she is now a woman. Only time will tell whether her new identity is as fulfilling as she hoped it would be. Either way, could it be our role to model to these new men and women what faithful manhood and womanhood looks like?

These are complex questions, to be sure, but they are ones that demand thoughtful engagement.

It is extremely important for us to recognise that the process that leads someone down the path of sex reassignment surgery is neither easy nor simple, and is fraught with confusion, guilt, shame and condemnation. Christians have played no small part in this.

We often wrongly assume that they have chosen this path out of some deep wish to mess with the created order. The truth is potentially far less sinister: transgender people, like most people in the world, are simply trying to be true to themselves. They believe themselves to truly be the opposite gender. Many have a deep and lasting grief over the mismatch between their experience of gender and their biological sex.

As with many things that frighten and confuse us, it continues to be easy for Christians to say, “snap out of it,” or “you shouldn’t feel like that,” or “just stop it, God says no”.

I cannot overemphasise how little this contributes to the whole discussion.

Feelings are legitimate person-shaping phenomena [but] the LGBTI community so emphasises the decisive power of emotions that it has become impossible to even challenge a feeling without being labelled a bigot.

Feelings are legitimate person-shaping phenomena. Our ineptitude in this realm is staggering, as if the only truth worth mentioning is the one that can be scrutinised by pure rational thought.

On the other hand, the LGBTI community so emphasises the decisive power of emotions that it has become impossible to even challenge a feeling without being labelled a bigot.

Neither extreme is helpful.

We need a lens through which we can see the feelings of others, accept those feelings as real and true for them, without releasing from our grasp the biblical authority to interpret and interrogate those same feelings.

How do you hold two seemingly contradictory truths in hand at the same time? The answer is practice. This is not an easy task, but it is an essential one if we want to have fruitful conversations with our transgender neighbours.

Did you know that Caitlyn Jenner says she’s a Christian?

In The Economist, Will Wilkinson said, “The tolerant Jesus of…Ms Jenner may not be the Jesus of Thomas Aquinas or Martin Luther or John Knox or John Wesley.”

Well, yes. He’s probably right. We are all guilty of sometimes imagining Jesus in a way that appears more palatable to us.

But we might be wrong to assume that the Jesus of Aquinas, Luther, Knox and Wesley would have condemned, picketed and protested against transgender people the way that Christians often do.

It would be easy for us to ask transgender people to make a seemingly simple choice for or against God’s creation, a straightforward either-or opposition of sin and virtue.

It’s hard to know. The Bible is remarkably silent on how Jesus responded to transgender people.

It would be easy for us to ask transgender people to make a seemingly simple choice for or against God’s creation, a straightforward either-or opposition of sin and virtue.

“The ultimate and simple decision is not found in the books of human deeds, but in the book of life, where it is a question of Yes or No: either a name is there, or it is not…However much our moral decisions strive for clarity, they are never unambiguous or translucent, even to ourselves. But – and is this not the gospel at the heart of evangelical ethics? – it is given to them by God’s grace in Christ to add up to a final and unambiguous Yes, a work of love which will abide for eternity.”

It is human to falter and err along the path towards God. Those errors and missteps do not alter God’s final Yes or No, which is based entirely on the death and resurrection of Jesus, not on our bodily transformations and secret sins.

Historically Christians have waged war on ethical body issues: abortion, euthanasia, gay marriage – these have elicited angry and fear-filled responses from some within the Christian community. Unsurprisingly, the conversation surrounding those issues has largely degenerated into a metaphorical fistfight. No one is gaining any ground; both camps are simply fortifying their walls for the next attack. 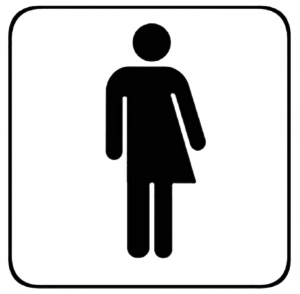 Today we have an opportunity to change that model. We have within our grasp the ability to listen. We can choose to respect the struggles and battles of others, even as we might disagree with their choices. We can infuse our speech with grace, not hate.

So when we hear that the Student Union at one Australian university has successfully lobbied for gender-neutral bathrooms, because “everyone needs a safe space to pee,” our response needs to be driven by empathy and love, not by fear.

After all, they’re right. Everyone does need a safe space to pee.