Today, Alicia Powell stood alongside thousands of other people at Sydney’s Hyde Park at a ‘Stand for Life’ to protest New South Wales’ new abortion laws that will overturn the legacy of her late mother, MP and anti-abortion campaigner the Hon Marie Bignold.

In 2 June 1988, Marie Bignold moved a successful motion in the NSW Legislative Council that led to the house affirming the legally recognised and protected sanctity of an unborn child’s life and upheld Sections 82-85 of the Crimes Act 1900 to eliminate the practice of abortion on demand. It became known as the ‘Bignold abortion motion‘.

Today, flanked by her father and her aunt, Alicia proudly carried a sign declaring “I survived abortion #ThanksMum&Dad #AdoptDon’tAbort”. She explains she was born in 1971 to a 19-year-old unwed mother. 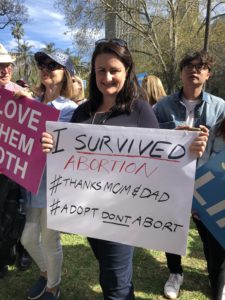 “I never met my birth mum,” she said. “All I know is she very bravely went ahead with her pregnancy.”

Alicia’s mum came to Sydney and gave birth to her at Crown St Women’s Hospital, giving her up for adoption with the condition that she be placed with a Christian family.

And indeed she was adopted by a childless Christian couple. The wife was a solicitor who became the Honourable Marie Bignold when, in 1984, was appointed to the New South Wales Legislative Council for the Call to Australia Group. The husband, Neal, also a solicitor, went on to become Justice Neal Bignold, a long-serving Judge of the Land and Environment Court of New South Wales.

As the Bignolds’ daughter, Alicia said she received an excellent education that helped her go on to achieve four university degrees and become a lawyer herself. She is a Christian and a member of St Matthew’s Anglican Church in West Pymble.

Asked how she feels about seeing her mother’s work overturned in NSW parliament, Alicia said she was proud of her mother’s legacy and was devastated to see it change.

“The fact that we call it a baby when it is wanted and foetus when it’s not shows you that the language being used is deceptive and manipulative.” – Alicia Powell

Like many at the protest, Alicia was disgusted by the manner in which the legislative changes were introduced into the NSW parliament and feels there wasn’t adequate time given for public consultation.

“It’s disgraceful and scourge on society,” she says. “God would be frowning on it and weeping for future children who will never live.”

She believes it is not a religious issue but a moral one.

Alicia is heartened by the thousands who turned up today to make a pro-life stand. With the legislation now passed, she said it was important for pro-lifers to speak up on the various amendments still being debated.

“The fact that we call it a baby when it is wanted and foetus when it’s not shows you that the language being used is deceptive and manipulative.”

The woman standing in front of us interrupted our conversation to remind Alicia to mention doctors being forced to perform abortions. She responded by saying the fact that there are no conscientious objection provisions for medical professionals was simply shameful.

“If we pronounce people dead when their hearts stops, how can we say that an unborn baby with a beating heart is not alive?” – Ann Kerley

Asked when she believes life begins, Alicia said confidently “at conception”. Asked if she had any opposition to contraception, she replied no, she was not a Catholic and did not follow papal instructions. For her, preventing conception was different from preventing a conception from continuing.

Maronite Mark was carrying a sign that said “Abort this bill”. Asked whether he’s hopeful the bill will be “aborted”, he hesitated before replying “I am prayerful”. So did that mean he was not really hopeful but was praying anyway? No, he said. He was “confident”.

Ann Kerley and Valerie Simms are both Catholic. Their signs read “Without the right to life, all other rights are meaningless” and “Equal rights for the unborn because human life begins at the moment of fertilisation.”

Ann explained that she finds it “ridiculous” that an unborn baby doesn’t have rights. She also thinks the law is inconsistent, given that someone can be charged with manslaughter of two people if they cause a car accident that kills a pregnant woman and her unborn child. 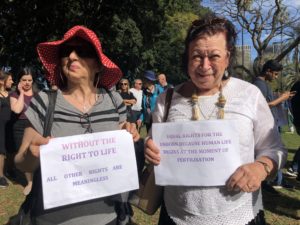 She’s been affected by videos of a baby in utero moving away from medical instruments that are going to abort it.

“If we pronounce people dead when their hearts stops,” she says “how can we say that an unborn baby with a beating heart is not alive? It’s just so ridiculous”.

Catholic Archbishop Anthony Fisher opened the rally in a prayer.

“Father God you are the author of life and love. Teach us how to serve you … you, who came among us as an embryo, foetus, a human child.” Then, “Holy Spirit God, grant that our leaders would always and protect and revere human life from conception until it passes into eternity.”

He told the crowd: “Yesterday the media reported that hundreds attended the pro-choice rally. Well, today there’s thousands attending a pro-life rally!” the crowd cheers. It’s evident they are buoyed by the experience of standing alongside like-minded others.

Archbishop Fisher asked: “What choice do the promoters of the abortion pill offer to the baby?” and replies “Death, if you are the wrong sex, have a cleft palate or are inconvenient.”

He went on to critique pro-choice advocates for offering no counselling, support or services to mothers facing unexpected pregnancies, saying they “have no choice but to abort”.

“They say they are pro-choice, but what do these ‘killbillies’ offer doctors?… no choice but to facilitate abortions… ‘Get with the abortion industry’s agenda or else’… So much for pro-choice!

“For women, doctors, parliamentarians and citizens, these killbillies are bullies who want you to have no choice but abortion. Surely we can do better than that!” he says.

“I pray today, Lord, that we might do better than that.

“On behalf of God,” Archbishop Fisher told parliamentary leaders,”you can do better than that”.

Then, quoting Deuteronomy 30.19: “This day I call the heavens and the earth as witnesses against you that I have set before you life and death, blessings and curses. Now choose life, so that you and your children may live.” 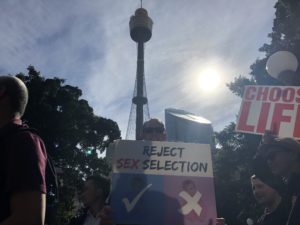