Dear world, I love you – Jesus

If Jesus wanted to advertise the Easter message to today’s world, what kind of campaign would he use?

Would he tap into our private digital worlds to remind us of his sacrifice for us? Would he shout his love from billboards and posters in city streets across the world?

Or would he write it across the skies, declaring “the glory of God” and proclaiming “the work of his hands”?

Perhaps he would do all three. This is the conclusion that Hillsong’s communications team came to when designing this year’s Easter advertising campaign.

“As always, coming into the Easter season, my team’s ultimate goal is to help people find Jesus – that’s what we set out to do,” head of Hillsong’s global communications Jay Argaet tells Eternity.

Argaet is one of the minds behind the megachurch’s Cross Equals Love Easter campaign, which began more than a decade ago and is now coordinated across all 85 Hillsong campuses in 23 countries around the world. Over the years, the campaign has used many innovative ways to communicate the Easter message, including buying 30,000 sticks of chalk and inviting congregations to draw the symbols for Cross Equals Love on footpaths (an idea inspired by Arthur Stace, who wrote “Eternity” in chalk on Sydney streets). The campaign also has posted billboards with the word ‘love’ in around 20 different languages; and written “love letters from Heaven”, which have been printed on posters around major cities.

But this Easter, the team has simplified its approach. “Coming into this year, we realised that sometimes we can try and create a theme or an idea … but really there’s nothing more powerful than Scripture,” Argaet explains.

After brainstorming about how best to share the Bible, the team decided to take Scripture to the people, rather than “constantly inviting” them to come to church.

“There’s a lot of preconceived ideas around church, that [people] know they’re going to be judged or the roof is going to fall on them … So we thought this year why not actually go where people [are] already searching?” says Argaet.

While it may be simple, this year’s Australian campaign is also smart. By tapping into the digital marketing power of Google AdWords, Hillsong is targeting people who are ­­– quite literally ­– searching for help and hope.

The team researched the most highly searched keywords that Australians enter into the Google search engine, such as “loneliness”, “stress”, “anxiety” and “bullying”. Then, they devised an AdWord campaign around these. So when people search for these terms, a targeted Hillsong ad is listed in the results, leading to a webpage with encouraging messages of hope, Bible verses, an invitation to Hillsong Easter services and links to relevant services such as Beyond Blue.

The second arm of the campaign takes place on the ground in cities across the world. “Altar call street posters” are plastered on billboards in busy streets and alleyways and, according to Argaet, “everywhere we can put them.” The posters invite passers-by to “imagine an unfailing love” and “imagine a peace that never runs out”, then lead them to a Bible verse and a “salvation prayer” that people can pray in response. 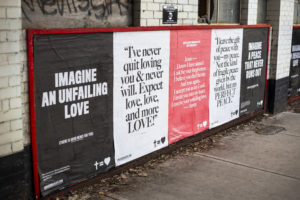 “So the whole campaign really is throwing out these ideas of audacious things that people are longing for, and then we back it up with the good news that this is actually who Jesus is and this is why he died for you,” says Argaet.

He notes the worldwide impact this could have, after seeing posters in Kansas City in the USA, in Bali and French-translated posters in Paris.

“It’s amazing thinking that in Paris right now … there is Scripture from the word of God bringing hope,” says Argaet – a fact that is even more poignant after the near-destruction of Notre Dame cathedral this week.

Argaet continues: “Our church, in its sheer size, when we have a collaborative effort like this, it’s so powerful that in unity we can bring this message of hope to the world.”

He is quick to clarify that the success of campaign is dependent on the Holy Spirit, not on “man’s work”. Argaet welcomes the uptake of Cross Equals Love by other churches. This is encouraged through a suite of free downloadable resources, including posters, banners and letterbox-drop cards.

“This campaign is not about people coming to Hillsong; it’s actually about people finding Jesus or finding themselves in any church,” explains Argaet.

The final two elements of the Easter campaign – which have been central during recent years – include the “Kilo of Kindness” food drive. Hillsong congregations “put love into action” by donating food items to families in need. To do this, they bring bags of groceries to Easter services or purchase food online.

There’s also the skywriting. In Australia, the Cross Equals Love logo will be written across skies along the East Coast from Hobart to Queensland over the Easter weekend. This extravagant activity has been part of the campaign here for nine years and is still a “no-brainer” according to Argaet. He again brings this idea back to the thought-provoking technique used by Arthur Stace.

“We skywrite Cross Equals Love, and the whole point is that hopefully people go, ‘What does that mean to me?’”

“I just love that idea to think each year we get to knock again, by God’s Spirit, on people’s hearts.” – Jay Argaet

Argaet concedes that there is really no way of tracking the effectiveness of campaigns such as this, apart from scattered feedback.

“To be honest, it’s not until eternity that I actually believe that we will … see the full scope of what God’s actually done,” he says.

“It says in Revelation 3:20, ‘God knocks on the heart of man.’ I just love that idea to think that each year we get to knock again, by his Spirit, on people’s hearts.”

Ever wonder what it was like to be part of Jesus’ inner circle? To actually…

Shortly before the crucifixion of Jesus Christ, Pontius Pilate, a Roman bureaucrat stuck between a…