The Australian Federal Police have conditionally said that they believe the man who was driving a van that exploded outside the offices of the Australian Christian Lobby in December was intending to commit suicide.

“We do believe he knew it was the Australian Christian Lobby, but he was not driven by a motivation or an ideology based on anything the Christian Lobby had done or said,” AFP Commissioner Andrew Colvin told a Senate Estimates hearing in Canberra on Tuesday 28 February.

“His motivation was driven by mental illness and his desire to commit suicide.”

“We don’t believe his primary motivation was driven to make any particular message or send any signal about the Australian Christian Lobby.” – Commissioner Andrew Colvin

According to The Australian, Mr Colvin told the Senate Estimates hearing that police have not yet been able to question the man as his physical and mental condition had deteriorated, and that the investigation was ongoing. 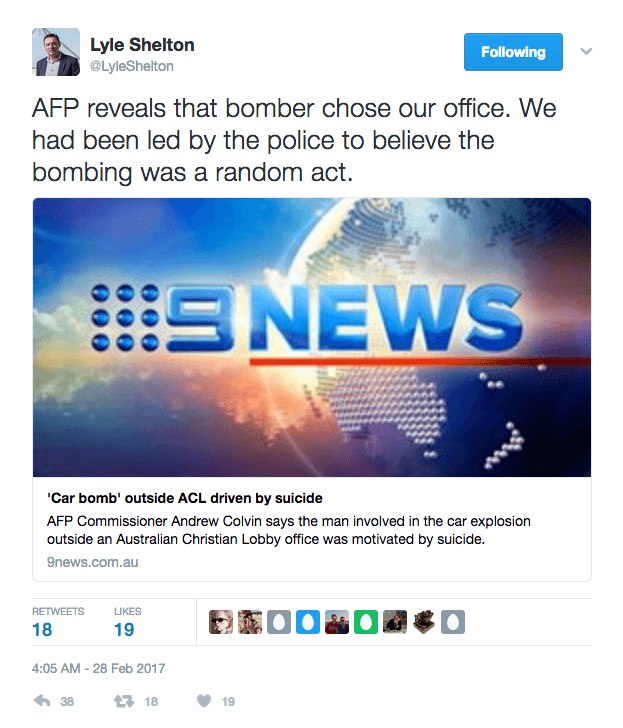 The van ignited in the car park of the ACL on the evening of December 21, 2016, blowing out windows and damaging furniture. No one was inside the building at the time, and the man inside the van was the only injured party.

“The alleged bomber knew he was targeting our office.” – Lyle Shelton

In a statement the following day, ACT police announced the 35-year-old driver of the van was not “politically, religiously or ideologically motivated”.

At the time of the explosion, managing director of the ACL, Lyle Shelton, said he believed it was a targeted attack, telling Eternity News, “I’m convinced that the police have ruled out political, religious and ideological motivations too hastily.”

But earlier this week, AFP Commissioner Andrew Colvin said, “We don’t believe his primary motivation was driven to make any particular message or send any signal about the Australian Christian Lobby,” Commissioner Colvin said.

Responding to this latest statement by the AFP, Shelton tweeted, “Can’t believe what I’ve just heard from the AFP in Senate Estimates. The alleged bomber knew he was targeting our office.”

I believe it's a targeted attack